Returning To The Roost....

Sunny weather, smiles, and much relief have been very much in evidence as pubs opened their doors - or garden gates - to let customers on to their premises for the first time in months. It is not a complete return to normality, but this first step has unleashed a collective sense of pleasure at being able to meet up with others once again.... 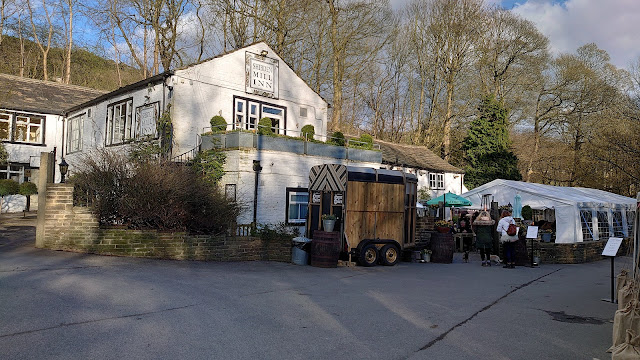 Last weekend around these parts, we had had snow and low temperatures which did not bode well for the outside opening of the first pubs last Monday, 12th April. Fortune was to smile though on the brave pub goer, and whilst it was not particularly warm, the sun was shining and inviting. Tables were waiting in yards and beer gardens, car parks and anticipation, marquees and gazebos on stand-by, bunting hung, staff primed and ready to go. It has been a desperately hard time for the hospitality sector and those that could were determined to make the most of the chance to re-open.
And the pubs rose to the occasion. Splendidly. Glad to see customers again, glad to be back in service, glad for the chance to earn a living. And for their part, the customers returned in their droves, like birds returning home to their roosts, some having booked the day or even the week off work. It had been a long time a-coming, there were thirsts to be satisfied, friends to meet, connections to restore. After months and months of winter gloom, frustration, restrictions, and in some cases isolation, it was just great to be back, back amongst smiley, happy people. The sun shone all week. It was like the start of the holidays, the first day of a new term, Christmas Day, VE Day, and everyone's birthday rolled into one. And of course, it being April, the evening temperatures dropped sharply, but it soon became a case of adding another layer and zipping up that coat as the next round was ordered.
My first pint back was at a local pub although not one that has been a regular haunt over the years. Walks and outdoor gatherings had led me there several times over the previous few months. And so, on Monday April 12th, I bought my first pint at a pub of 2021. I had driven the couple of miles from home to the beautiful 17th century Shibden Mill Inn, set in an idyllic location beside a stream at the bottom of the upper Shibden Valley a mile or two out of Halifax. I met a couple of friends there and enjoyed an excellent (if a little pricey) pint of Vocation Bread and Butter under cover of a gazebo beside the stream. It was bliss, great to be drinking hand-pumped cask ale served at a pub. It was not too busy, we had not had to book, the staff were charming, and although the temperature soon dropped, it was a very pleasant re-acquaintance with the pub. The Shibden Mill Inn has a number of real ales available, as well as Vocation there were beers from Saltaire and Withens available that day. It is well-known for its food, having been awarded 2 Rosettes by the AA as well as being Yorkshire's Country Dining Pub of the Year, and if you fancy an overnight stay when things get closer to normal, 11 rooms provide AA 5-star accommodation.
And throughout the week the visits continued. I called at the Stafford Arms at Scholes, near Cleckheaton, a proud detached building set slightly back from a busy crossroads. The pub is now run by my friends Paul and June Dickinson who for many years ran the very popular Beck on Bradford Road in Brighouse. During lockdown an extra outdoor seating area has been created alongside the car park, and both that and the beer garden around the back of the pub were pretty full when I arrived. There were a few familiar faces, including several emigrees from the Beck, and I sat and had a good natter with one of them. Paul appeared, we said hello and bumped elbows, and a few minutes later he brought me a Bradfield Farmers Blonde, which was spot on, cool and refreshing in the pleasant late afternoon sun. The Stafford has several more ales on handpump, is a friendly, welcoming pub, and is well worth a visit. 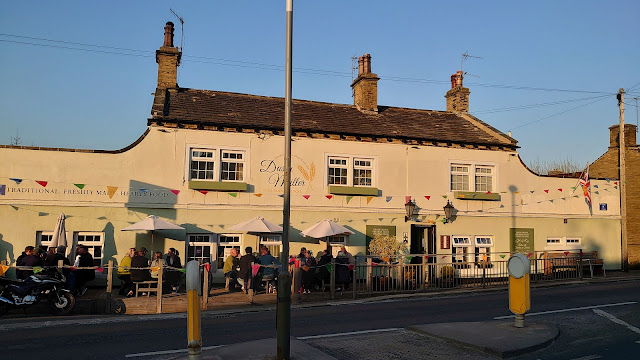 Meanwhile, close to home, the Dusty Miller at Hove Edge has been extremely busy all week. The seating around the side of the pub has been augmented by a couple of marquees and tables in part of the car park. And every day the crowds have arrived, celebrating the great release following the gloom of the past few months. It has been great to go back and catch up with so many people, the staff have been so welcoming, and the service has been absolutely spot on. Like the Stafford Arms, Farmers Blonde is currently being served, along with Taylors Boltmaker, both have which have been in excellent form.
At times, there has been an almost a swaggering confidence, unlike the return last July after the first lockdown. Yes, many people have had jabs, but there is a wider sense of defiance in the air. Having had a taste of the old days, there is a feeling abroad that no way are we going back to the depths of lockdown. And of course, many conversations have been about being vaccinated. "I was fine after mine", "I felt crap for a couple of days", "I had the Oxford, what did you have?", "they were really well organised", "our Jack says it's all a con so he's refusing it". The jabs, how hard lockdown was this time, and "Mother of God, did you see this week's Line of Duty?"
Thursday, I was at the Grayston Unity in Halifax for a lovely private do. We sat under the lights in the covered and heated back yard and I enjoyed a few pints of the excellent 3.8% Little NEIPA from Black Iris on keg. It was great to see and chat to so many familiar faces again on what was a lovely convivial evening. Just like we used to have and almost take for granted.
And that opportunity is something we have not been able to enjoy for some time. Yes, only 25% of pubs have re-opened. Yes, it is limited to outside until the 17th of May. It is definitely not quite as it used to be yet. But it is just great to be back....
Follow me on twitter: @realalemusic