One place I am definitely looking forward to visiting again when they re-open is the Buffet Bar in Stalybridge. And whilst it will be great to pay a visit as soon as it is possible, that first visit back to the famous bar on the Manchester Piccadilly to Huddersfield trans-Pennine route will no doubt stir up in me a huge dose of mixed emotions.... 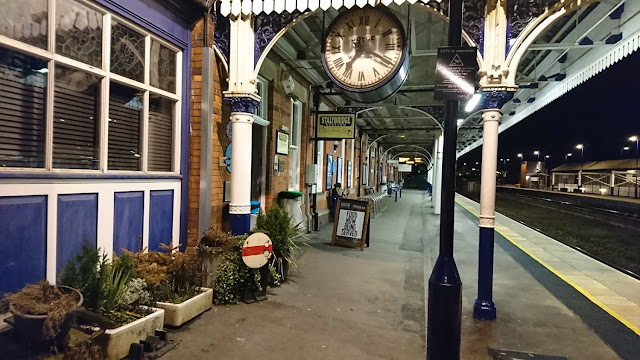 Stalybridge Buffet Bar is one of the few remaining Victorian railway station buffet bars left in the country, and is probably the best-known. I started visiting the bar regularly in 2006, when my job meant I was working about a mile and a half away in Hyde. Back in those days, the bar was owned by John Hesketh, who had spotted the potential of the rambling old Victorian station buffet as a real ale mecca. It had originally opened in 1885, and had meandered on over the years quietly serving customers on the trans-Pennine route, but back then it was not known for its beer. John's idea of a good selection of real ales in an atmospheric bar crammed with railwayana paid off, and with Sylvia Wood who had previously run the popular Station Hotel in nearby Ashton-under-Lyne looking after the bar, the Buffet Bar built up a head of steam. Its reputation grew, and people flocked from near and far to sample the beers and enjoy the atmosphere. And with a number of other pubs and bars along the trans-Pennine route promoting real ale, the original Ale Trail was born. Groups of real ale drinkers became a regular feature on the line at weekends as they travelled between Manchester and Dewsbury. Its fame grew, and really took off after being featured in James May and Oz Clark's TV series Drink to Britain.
John sadly died, and Sylvia moved on. The bar subsequently became part of the Beerhouses Group, who also own the West Riding Refreshment Rooms at Dewsbury, and which with the Buffet Bar provided a book end for the Real Ale Trail. Sam Smith, who had previously looked after the Sportsman and later the Corner Bar in Huddersfield, took over the running of the bar for a time, and hit it off with the locals with her bubbly personality and broad Featherstone accent. And since then there have been a succession of managers like Caz and more recently Jamie who have maintained the Buffet Bar as a destination for real ale lovers. 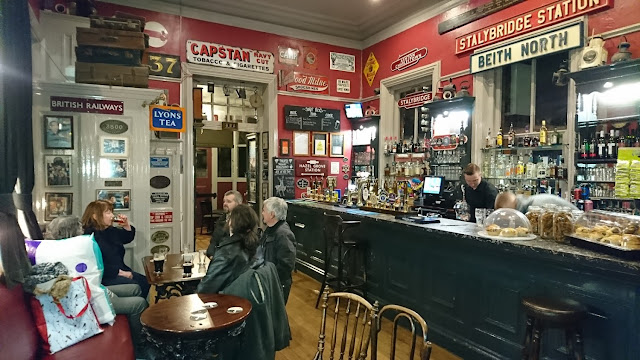 For me though, the history and the obvious heritage aside, the Buffet Bar is a special place. For over 14 years it was my default destination for a pint after work, a place to chill out, let off steam, chat, laugh, and put the pressures of the working day behind me. A place of faces who I began to recognise when I first went in who then became friends over the years. And then there were the familiar faces that I would see regularly, exchange pleasantries, but never really got to know. The frequent arrivals and departures, a daily routine influenced but not dictated by the happenings on the tracks outside.

And it hit me this week that when I visit next it will be in different circumstances. Since we went into lockdown 12 months ago, I have only managed one visit after I'd made a rare visit to the office, and that solitary visit took place on the only occasion when lockdown hadn't meant the pubs were closed. In the meantime, I have retired from my job in Hyde, but in starting a new part-time job which is for a company based in Leeds, it means my next post-work pint is likely to be at a different location. Of course, I can still go for a pint after work at the Buffet Bar with the train journey from Leeds to Stalybridge comfortably under an hour. But the context will be different; no longer will I be as frequent a visitor, no longer a regular (though as Yorkshire Chris I could never claim to be a local!), no longer able to just visit on a whim after a particularly good or bad day at the office. 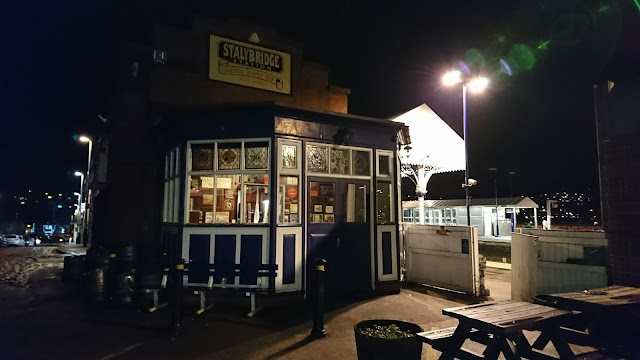 For over 14 years, the Buffet Bar was at least as much a constant as my former workplace. Not least because many of the regulars I got to know were still around long after that crazy manager at work had run their course. Work colleagues would come and go, the focus of the job would shift and adjust, but the Buffet Bar was always there, a familiar, reliable haven at the end of the working day. It was a place where at first we would congregate at the bar and enjoy banter with the staff, but gradually over the years we moved to the tables opposite the bar. Every one of us did something different, so the conversation was eclectic and the humour often side-splitting. Flights of fancy would take off. Snacks, often seriously hot, sampled. The state of the nation, the state of the train service, the state of the fire, the state of the toilets. Regular topics of conversation. Moans about the working day. The quality of the beer on offer, or the choice available was frequently discussed. Recommendations proffered as you arrived, or advised to avoid with a wink of the eye if a particularly excellent one. The numerous staff who have worked there over the years have included some real characters, but with very few exceptions, all have been friendly and welcoming. Like the best pubs, you could always go in on your own, stand at the bar, and have a great conversation with the person pulling your pint, or strike up a conversation with a perfect stranger stood next to you.

And so, when I do re-visit, it will be great to catch up with the old teatime gang again. Great to renew contact, see how everyone is. Memories will come flooding back from the past 15 years. The old signs: Beith North, Capstan Navy Cut. The stopped clock, the old suitcases and odds and sods on the shelf above the door. The beer board which always seemed to be a few beers behind. The irritating nudge from a backpack worn by a spatially-unaware customer whose train is about to leave. Like a much-loved family member, you don't expect perfection. But I kept going back because the Buffet Bar is one of the warmest, friendliest places I have visited in my life. And I have missed it very much. 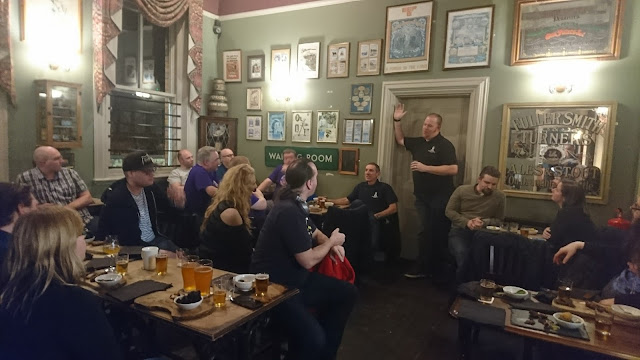 The Buffet Bar is a definite must-visit for anyone who loves good beer and our railway heritage. But for me, as someone who has come to know the place very well, I have absolutely no doubt that when I do re-visit in the next month or two, there will be a tear or two in my eye as I board the train back to Yorkshire....