Sloping Off To The Marble Arch....

September 02, 2020
After a gap of several months stretching back to my visit to the Beer Festival in January, I finally paid a return visit to Manchester. And this is what I found.... 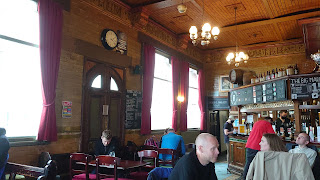 I had e-mailed the Marble Arch fairly early in the morning asking if there was any availability of tables for the afternoon as was advised on their website and social media but a few hours later as my train was pulling into Victoria Station, I still hadn't heard anything. As I walked through Victoria's grand but fairly quiet concourse, I decided I would give it a go anyway. I headed across Corporation Street, where the old buildings, many owned by the Co-op, looked even more imposing and impressive after all these months; I was back in a proper city.

I walked up Hanover Street which is now open to traffic, having been closed off for a year or two as part of the area's extensive re-development. I expected there to be a gap where the Pilcrow used to be but it was still there and it was still open, it having previously been announced that the pub would be shutting down and the building re-deployed elsewhere in the NOMA district as a community centre. I decided I would call in before I caught the train, but it was onwards past the new Co-op building to Angel Meadows and up to Rochdale Road where a few minutes walk away the Marble Arch was waiting.
A notice on the door said to wait in the doorway to be admitted, a guy in a mask sat at a table beckoned through the window to me to come in. I asked if there was any room and there was for a couple of hours or so. I mentioned I had e-mailed earlier to enquire, and he said he'd just seen it - "Chris? Dyson?" I nodded. I gave my phone number, and then was pointed towards a table opposite, plenty of room, a four-seater. A masked guy in a red t-shirt quickly sprang up and took my order. A pint of Pint, of course. It duly arrived, a most enjoyable 3 on the NBSS scale. I sipped my Pint and looked around; most of the tables were occupied but there was an unhurried calmness about the place. There was time to appreciate the beauty and character of this classic pub with its beautiful tiled walls, dark wood, and infamous sloping floor as some of the neighbouring tables tucked into rather impressive-looking food.
I thought I would try a Manchester Bitter next, and this was even better than the Pint; well-balanced between the malt and the hops, with a dry finish (NBSS 3.5). And then to finish my visit here I tried a half of the newly-revived Ginger, made to a slightly different recipe than previously I was told, and with a comforting slug of warmth bestowed by a combination of the ginger and the 6% alcohol (NBSS 3). It was a most pleasant hour and a half in one of my favourite pubs. And in other Marble news, their other city centre venue, 57 Thomas Street, in the Northern Quarter, has just been sold to those ambitious and innovative other brewers from Aberdeen, Fierce, whose bold move gives them a 3rd outlet following openings in their home city and Edinburgh. It opens on September 4th.

I moved on, my intention was to visit the Smithfield, but when I arrived there the door was shut although there were some lights on inside. I moved around the corner to Mackie Mayor, but there was a queue to get in so I decided I would give it a wide berth. I walked down Swan Street, passed the Band On The Wall, and on the other side of the road three blokes emerged from the Bar Fringe, the front door having a sign on it saying exit. So entry must be round the back, I reckoned. I crossed over, wandered round, and headed in through the beer garden. A guy greeted me outside and led me in, telling me how they were operating under the current rules and guidelines. The pub was quiet, with just a couple of other guys having a natter and a pint. I sat at one of the raised tables by the window, checked in with my details, and ordered a pint of Revolution from Stourbridge-based Green Duck Brewery. A single hop pale ale, made with Nelson Sauvin hops this was a very pleasant NBSS 3, with an underlying gooseberry-like tartness. I had a natter with the guy about the pub, how busy they'd been since lockdown, and the ongoing building of flats and offices which seems to be continuing apace even though the city is, and is likely to continue to be, much quieter. I have always liked Bar Fringe for its mix of the bohemian and pure Manchester; it is a place of character.
The Crown & Kettle nearby is currently closed undergoing major refurbishment, and so I re-traced my steps to the Smithfield which, as given away by the smell of new wood and new seating, has had a pretty decent refurb itself. A few years ago, this was a much more basic spot, but gradually it has been upgraded and it is now a comfortable and very pleasant place for a pint. The beer, which is always good, is a showcase for Blackjack beers, as well as featuring a number of guests. I opted for a pint of Blackjack Pale, a very solid NBSS 3, which was followed by an equally enjoyable Mosaic on keg. As at the previous two pubs, the rules were clear and signing in straightforward, with the staff courteous and friendly. I was joined here for a drink by our Tom and his friend, Nicole, who, purely by coincidence had decided to have a weekend stopover in the city.
I left them at the Smithfield after another drink with half a mind to visit the Arndale Centre, but when I realised the time I quickly abandoned the idea. Walking through the Northern Quarter it was interesting to see how tables and chairs had taken over some of the streets to increase the capacity for some of the bars and restaurants; this was Edge Street: 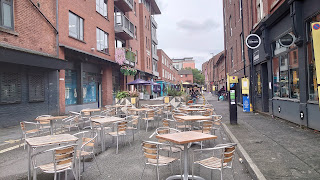 I worked my way back towards Victoria, and as with some of the streets of the Northern Quarter, Hanover Square was occupied by tables and chairs, although they were much more spaced out. These were to provide an overflow for the Pilcrow. And why was it still open? Apparently the onset of lockdown had put the plans to re-locate and redeploy on hold, and so for the time being at any rate, it remains open and available for that first pint as you arrive in the city, or the last one before you leave. And it was good to see it open, although I'm not sure if I liked the polling station-style screens used to separate the tables inside which gave the bar a slightly claustrophobic feel: 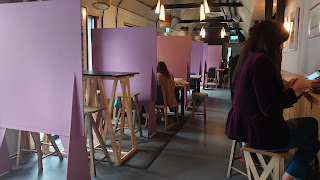 That apart, the service was pretty good, once I had downloaded the app required - which also works for the Pilcrow's sister establishments Port Street Beer House, Common, and The Beagle at Chorlton - to place an order. I have to thank the member of the bar staff who patiently guided me through the process which took a few minutes, but once done it didn't take long to place an order and for my pint of Sonoma to be delivered to my seat on one of the stools down the side of the bar. This was my first pint of this Track stalwart since I had ordered a mini-keg direct from the brewery during lockdown, and it was a most enjoyable 3 on the NBSS scale. I sipped and savoured my pint as the minutes slipped away, and before long it was time to head back to the station to catch my train home.

It was only a brief visit to the city, and with some of the places I visited long-standing ports of call, they were certainly a bit different to what I was used to, but everyone was welcoming, they were comfortable, and there was some pretty good beer to be had. The pubs were quieter on this grey and drizzly Friday afternoon, the streets were definitely quieter, the traffic lighter, but I felt back at home in the city very quickly after getting there, and  I don't think I could really have expected any more as we get used to this changed world in which we now live....