Keeping The Songs And Spirits Alive....

August 16, 2020
It seems that since they were allowed to re-open in early July, recovery from lockdown has generally been slow for most pubs and bars that have decided to do so. Meanwhile, a welcome return to outdoor live music and events can't mask the fact that this has been, and continues to be, a particularly difficult time for musicians, venues, and those who enjoy going to gigs.... 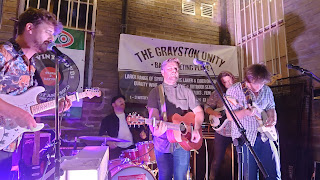 It has been great to see some live events recently after such a long time.

I have seen 3 or 4 so far, all at my regular haunt of the Grayston Unity in Halifax. All outside, round the back with only a tarpaulin sheet and some additional polythene providing protection from the elements. Name and number requested, plenty of sanitiser on hand, a one way system, screens on the bar, and social distancing tape and warnings, and every gig has felt very safe and comfortable. Although the disappointing weather of July gave way to some tropical sunny weather last week, it wouldn't really have mattered if it had been cold and wet. The first band I saw post-lockdown were local band Oil City, whose covers of the likes of Dr Feelgood and The Jam went down well with a decent crowd, most of whom who were stood in the car park beyond with all the seats taken. Like the weather, I wasn't bothered what the music was; I would have happily watched an ensemble blowing out the tunes on the Patagonian nose flute if it meant I could see some live music again!

I had seen some live music of sorts during lockdown; many artists had held their own live streams, and The Grayston had hosted Facebook Live events virtually every week, some of which were excellent. One of my musical friends, award-winning blues guitarist Chantel McGregor, had performed live every Saturday during the lockdown, her Shed Sessions attracting hundreds of regular viewers to see some excellent acoustic versions of her own songs and covers of some blues, rock, and country classics. There were certainly plus points about many of the streams; with the artists generally performing from the comfort and familiarity of their own homes, they were usually more relaxed, and with no trains to catch, or waiting lifts, there was quite often an extra song or two.
One of the artists I had seen doing a live stream was folk guitarist and singer Henry Parker, who played live at the Grayston last weekend, and who is the lonely figure captured in the picture above. Good though the stream was, it was infinitely better to see him perform his intricate and mesmerising tunes in front of a live audience, albeit a socially distanced one. And with an audience there, the chance to share the experience, appreciate the perspective of another, get caught up in the atmosphere - it is so much more human than a live stream through the ether when you can see the whites of their eyes. And the chance to talk to the artist after they've finished, thank them personally, maybe buy an album - it's not the same online.

It has been hard for musicians, with gigs and tours cancelled, studios out of bounds, and album releases delayed with the inevitable loss of earnings. It is has also been hard for so many of the places they play, most of which also host so many other events, ranging from the arts through to meetings and other events. Most of these venues, such as theatres, clubs, and parish halls, as well as dedicated music venues have lain largely dormant since March, their social heartbeat no longer ticking and their income streams dried up. For some, despite efforts by the likes of the Music Venue Trust and Independent Venue Week, belated aid from the government, and the recent announcement that socially-distanced indoor gigs can start to begin in areas without a local lockdown has come too late to prevent several venues across the country announcing that they are closing their doors for good. And of course, the inevitable reduction in capacity required for social distancing means it simply won't be viable for some venues to operate.
One day during the week, a memory popped up on my Facebook from a year ago. It was some pictures from a wonderful gig I had attended last year at the Hebden Bridge Trades Club featuring New York band Bodega, and local heroes Working Men's Club. It was probably my favourite gig of 2019, with both bands on absolutely top form. It was yet another sensational gig at one of the best venues in the country, which has consistently pulled in top artists from this country and overseas, thanks to the skill and efforts of Promotions Manager, Mal Campbell. The Trades has also supported and championed many of the excellent bands that have come up from the local scene over the past few years such as Working Men's Club, The Orielles, and more recently, The Lounge Society, and The Short Causeway. It also plays a major role in the life of the local community, with many events and meetings held there, and of course it has a decent bar with 3 or 4 real ales on. And yet, like so many venues who are facing an uncertain future, the Trades Club has been forced to set up a crowdfunding appeal just to keep going. You can donate here and help to save a very special place: https://www.crowdfunder.co.uk/helphebdenbridgetradesclub
And back to the Grayston, where last night there was some excellent music from Rook and The Ravens (opening picture) and Later Youth. It was outside of course, with the audience spaced out in the car park and in front of the splendid Town Hall, many enjoying some of the excellent food from Hey Shawarma, whose van is now becoming a regular feature outside the Grayston at weekends. And with some good beer as well  - last night the Goose Eye Chinook was on form, and there was the bonus of Vocation Pride and Joy on tap. Just like the Trades Club a few miles away, the Grayston should be applauded for what it does for the town of Halifax and beyond, providing far more than just the normal functions of a pub, with its unwavering support for music, the arts in general, and local enterprises. Whilst the current restrictions mean it has had to adapt itself to the new rules, it has seized the opportunity and become, along with Loafers in the Piece Hall, one of the first places in the area to stage live music again. It is still managing to be as welcoming as it was before, and like the Trades Club, continues to be a very special place.
And up and down the country there are of course plenty of other special places, all making an important contribution to their local communities. Whilst they may or may not be open yet, they all need our support, just as the vast majority of musicians do.

And sadly, for those that don't make it, their communities will be all the poorer for it.