September 10, 2019
Work and a pint at the end of the day have been inextricably linked for centuries, and still are to this day. Here are a few thoughts.... 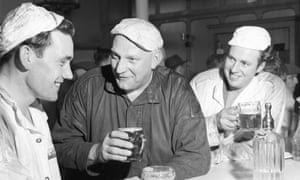 This is not the first time I have written about the connections between work and drink.

Last time, back in the early days of blogging - it was actually the 4th one to make the cut - I mentioned how much I loved a pint after work. And the piece I wrote,  A Pint at Teatime, was a brief homage to, in my opinion, the best time of the day to enjoy a pint.

And 5 years on, my opinion hasn't changed. After a busy day and your head is mashed, you need to seek out a place where you can unwind. A place where anything goes apart from too much talk about the dreaded W-word, a place where you can talk rubbish with impunity, catch up on the latest gossip, discuss the events of the day, even maybe learn something. The other night at the Stalybridge Buffet Bar we were trying to come up with the names of different champagne bottle sizes. And then list them in order. So - altogether, deep breath - Magnum, Jeraboam, Rehoboam, Methusalrh, Salmanazar, Balthazar, Nebuchadnezzar, etc.etc. Tonight someone had produced a book about mushrooms following a recent conversation about an encounter between Bob - a lively Schnauzer and regular - and a Giant Puffball as recounted by his owner Andy. The working day seemed a long time ago.
Truth is, it could have been anything. Many years ago, I used to call in the now sadly-closed Red Rooster which always had a great criac. In those days it was always a centre of excellence for daftness: one time I called in, there was a contest going on to see which of the guys could project their extended tape measures the furthest without them bending. Sketches from 'The League of Gentlemen' might be recited, whilst all the while someone would be moaning about what a crap day they'd had at work.

These, and other great teatime pubs I have frequented over the years, such as The Red Lion and The Fighting Cock, both in Bradford, the Commercial in Holbeck, and the Barge and Barrel in Elland were all great places where they all had one thing in common; they were essentially places where people from all types of occupation came together to let off steam and relieve the stress of another day at work.

And the connections between work and drink go back centuries. Back in the days when the country and economy were more agricultural, beer and cider would be produced and eagerly quaffed by workers not just after, but sometimes during, the working day in those pre-Health and Safety-conscious times. The ploughman, the miller, the farmer, the labourer, they all enjoyed a drink, and the evidence is still around today in the names of pubs we drink in - my local pub is the Dusty Miller at Hove Edge, the name shared with countless pubs up and down the country. Likewise the Farmers Arms is another common name, as is the Plough, and so on. All of them indicative of the links between work and drink. And famously, and incredibly, when you put it into today's context, up until as recently as July 1970, the Navy used to issue a daily tot of rum to crew on board ship.

When the country became more industrialised in the late 18th century, the link between work and drink continued. All around the burgeoning mills, mines, factories, and shipyards, pubs sprang up to cater for a thirsty audience. The end of a shift or the lunchtime break would see a dash to the pub: indeed many pubs in those sepia-tinged days would pull the pints before the end of the shift and they would be lined up on the bar in readiness for the onslaught, with the food on offer limited to pies and sandwiches. And the pub names here would often reflect the industry or occupations of the surrounding workplaces: the Miners Arms, the Furnace, the Railway, the Wharf, the Slubbers, the Fishermans, etc.. And of course, the rise of the Working Men's Clubs further emphasises the connection between work and drink.


Over time, as society changed, jobs changed, occupations became more office-based, although the names of pubs didn't reflect this - how many Solicitors Arms or The Call Centre can you think of? But again, the work connection continued. Pubs would be patronised at both lunchtime and after work, and even to this day, a declining number of occupations - financial services, the law - still to some extent enjoy the traditional long lunch, particularly if a client needs to be entertained. Pubs still cater for the lunchtime trade but these days it is far more likely to be alcohol-free with food very much the focus.

The decline of so many of our traditional pubs in recent years is in many cases a reflection in the decline of so many of our traditional industries. As factories, mines, and the shipyards closed, so did many of the pubs that served them as people moved further afield to find work. And likewise the connection between many of the new sources of employment and their local community became weaker. The need to drive to work or a long journey to work cut back the traditional pint at dinnertime or after work. But legislation has also played a part, as has the rise in Health and Safety regulations and changing employee contracts and working patterns.
The connection between work and drink has therefore changed. But a glass of wine or beer at home after a busy day is a reflection of lifestyle and social change which has been another nail in the coffin of so many of our pubs, but it is still essentially fulfilling the same role. But in my opinion a pint in the pub after work and the good craic that goes with it still takes some beating....