May 18, 2019
Incredibly, we are now in the middle of May, with the year just whizzing by. And it has been a busy month so far with plenty going on in and around Halifax and Calderdale..... 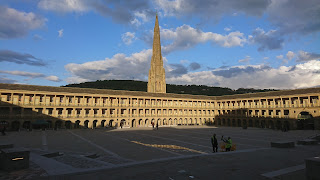 It doesn't seem two weeks since I was watching The Orielles playing a hometown gig at The Square Chapel in Halifax. The band are simply getting better all the time, their timeless indie-pop now being enhanced by the permanent addition of keyboard player Alex and an increasingly funky tightness, as evidenced on their most recent single, Bobbi's 2nd World. Lead guitarist Henry is playing with a growing confidence, with almost Hendrix-esque flourishes at times. The band were excellent, starting off with Old Stuff, New Stuff and over the next hour or so they took us through another 12 of their tunes finishing up with Sugar Tastes Like Salt. Included in the set was one of their earlier singles, Let Your Dogtooth Grow, and for those that wanted the full evening's entertainment, there had been a showing earlier of the Greek art house film, Dogtooth, the inspiration behind the track, although we missed it in favour of the Grayston Unity. I thought the band were excellent, although I am not sure if on the night the acoustics worked best for them. And I couldn't help thinking that the regular friendly, helpful, but, er, somewhat senior stewards, were slightly incongruous in the context of a rock gig, although at least one of their number was to be seen throwing some shapes at the side of the stage....
I was back close to Square Chapel a couple of days later, having decided to go to the Piece Hall to see the start of the 4th day of this year's Tour De Yorkshire, the cycle race which has become one of the biggest events in the regional sporting calendar, and with riders of the calibre of Chris Froome taking part, a key event for the sport. It was pretty busy, but after queuing up for a quarter of an hour or so, I got in to be greeted by a sea of people. I went up to one of the balcony walkways and surveyed the scene. There was a large starting gate in the middle of the arena and a large TV screen in one corner. The race build-up was being hosted by an American commentator, jarring somewhat with the historic surroundings of the 18th Century Piece Hall. The race started ceremoniously and the riders pedalled out of the Hall, with the race proper starting on one of streets nearby.
It was a great atmosphere, the crowd was loving the occasion. I bumped into a few friends, I watched local folk singers the Landlubbers perform their song Wheel Away, especially written for the event, and then I went for a beer and watched the race on the big screen for a while.

I left the Piece Hall behind and walked the 20 minutes or so to the Cross Keys at Siddal, one of my favourite pubs in the area but one I hadn't been to as often over the past few months. My mate Roger Davies was performing there this afternoon, and as I walked in, he was just setting his gear up. Landlord Hugh greeted me and I ordered a pint of Salopian Lemon Dream. It was spot on. Working alongside Hugh was Jack, formerly of the Pump Room Micropub, which had suddenly closed down a few days earlier, a few months before its 3rd anniversary. It is always sad when a pub closes, quite what happened I don't know.

Roger finished tuning up and came over to the bar, where he accepted my offer of a pint. We chatted for a bit, it was not the first time he has appeared at the Keys, which has switched to a more acoustic vibe for the Sunday afternoon gigs. Roger doesn't gig as often these days, with his burgeoning work as an artist making increasing demands on this time. He headed off to begin his stint and I ordered another pint of Lemon Dream. Roger played many of his old favourites which down well with the crowd. One of the songs he performed was Peter Brook's Paintings, dedicated to his hero, the sadly-departed Brighouse-based artist famous for his wintry Pennine landscapes. Peter - or Mr Brook, as I used to call him when he was trying to encourage a frankly talentless teenager during art lessons at school - always used to include a cameo of himself and his dog in his paintings. Likewise, in Roger's paintings, he includes himself, flat-capped and guitar case in hand, a participator in the scene.
The music was great, the beer was spot on, and I thoroughly enjoyed my afternoon at the Cross Keys. From there, I walked back into town where I met several friends at the Grayston Unity. The sun was still out, so we took advantage of the terrace beside the Town Hall to catch the last of the day's rays before the sun disappeared behind the surrounding buildings. It had been a most enjoyable day, and with it being a Bank Holiday weekend, there was the added bonus of not having to rush out of bed in the morning!
Last weekend, my good friends the Rainey Street Band were playing in Brighouse at Jeremy's so I went along to see them. Jeremy's is a modern bar overlooking the canal basin and whilst it does have a couple of hand pumps, this comes over as being a token effort, and not for the first time I ended up drinking lager in there. The band were good though, despite the unhelpful acoustics and, on this occasion, a temperamental mixing desk, as they treated us all to a heady mix of bluegrass and Americana.
Good beer was required, so as the band finished, we all drifted over to the Market Tavern. I walked alongside the canal, where the evening sun was still beaming down. After having been condemned to drinking lager at Jeremy's, the sight of Squawk Crex on one of the hand pumps was a relief, and as such, the first pint hardly touched the sides! As ever, the beer quality in here was excellent, and I had a pleasant hour as the rest of the gang trooped over from Jeremy's to enjoy the beer and conversation at this excellent micropub before heading home. Unfortunately this one wasn't a Bank Holiday weekend, so there was no chance of a lie-in this time....

And here are The Orielles and Bobbi's Second World....