November 04, 2018
An exciting new venture opened this week in the West Yorkshire market town of Elland, so naturally I went along to have a look. Here's what I discovered....

It had been a long time since I had enjoyed a teatime pint in Elland.
Way back, in fact, to the days when I lived in the town and used to frequent the Barge and Barrel, which was at the time one of the top pubs in the area, although now apparently up for sale after years of dwindling sales. And so on Friday, when I called in at Elland Craft & Tap, it must have been the first time I had enjoyed an early evening pint in the town for almost 20 years.
Anticipation had been building locally for a few months, ever since a planning application was lodged by Elland Brewery with Calderdale Council for a new bar in a former building society branch on Southgate. With Elland having lost so many of its pubs over the years, not surprisingly there was overwhelming support for the bar amongst the townspeople, with only one objection. And with the planning application approved, work began on converting the premises in to a bar, so that with all final approvals and inspections successfully completed, after a soft opening last Wednesday evening, it officially opened its doors at noon on Friday.
I parked up in the car park below the Rex Cinema, next to the former Yorkshire Bank, opposite the now closed Halifax Bank. I set off walking on Southgate past the former Lloyds Bank - it's not just pubs that have closed in the town - and a few minutes later I spotted the new bar, a solid looking building sandwiched between the town's post office and a Thai restaurant. A couple of old friends, Mandy and Glyn, greeted me as I walked in. Another old mate from my Elland days, Mick, and his wife, were just on their way out. Francis and his daughter Alice from the Cross Keys were there. The room was pretty full.
I went through to a second room, where the bar is situated. My old mate, Russ, was in there, and he introduced me to Mike Hiscock, one of the bosses of the nearby Elland Brewery, who was taking a short break from working behind the bar. We chatted about how Mike, who's originally from Garforth, and used to work for Scottish and Newcastle, and John Smiths, came to work at Elland Brewery and how he ended up in his current role. We talked about the origins of the brewery, which reminded me of the connection between here and the last place I'd had that teatime pint in Elland. The brewery started out in 2002 as Eastwood and Sanders Ltd, which came about through the merger between Dave Sanders' West Yorkshire Brewery and The Barge and Barrel Brewing Co, which was run by the avuncular John Eastwood out of the former family room in the Barge and Barrel! At least one of John's original beers, Nettle Thrasher, is still part of the core Elland range today (the others being Beyond the Pale, Elland Blonde, White Prussian, and the serial award-winning 1872 Porter). We talked about the re-designed, informative pump clips, and some of the old and rather random designs they'd had in the past. And the name? Cask is very much part of the offer, Mike using 'Craft' in its wider and correct sense to mean hand-crafted and traditionally produced.
We were joined by Stuart from 'The Pub Paper', which is an invaluable source of information for finding out what beers and other events are on at pubs throughout Calderdale each week. He had called in to drop off a few copies of this week's edition and stayed around for a chat and a beer with us. People were continuing to come in, several of which I knew, including a few friends from Brighouse - Tony and Maggie - whose son Ryan has just fortuitously moved to Elland - and Keg. Despite being busy, the atmosphere here was relaxed and the service remained friendly and efficient throughout. I had to go, as I was in the car, but it was a most enjoyable first visit.
Mike was happy for me to take some pictures, but I realised when I went through them later I'd completely missed the fantastic front room and its wood panelling, partly because it was busy and partly because I was talking so much! So I decided to go back the following day, on the basis that if I called in mid-afternoon it would be quiet enough to have a proper look round. I parked up in the little car park opposite the bar. I walked in through the small lobby. Mike greeted me from behind the bar, still working after what had been an excellent first day. Lemon Dream was on the bar, so I ordered a pint and looked around. I hadn't noticed the bars on the window at the back of the bar last night either, a remnant of the building society days no doubt. I hadn't really appreciated the bar itself, an MDF affair, but which does a remarkably good impression of solid wood!

I looked around the rest of the place. The lounge with its beautiful wood-panelling and original clock, beneath which you can imagine many a nervous young couple waiting to meet the manager to discuss their mortgage application. It makes the fact that its last immediate use was as a beauty parlour seem particularly incongruous!
I finished my beer, which was excellent, and said goodbye to Mike, saying I'd be back before much longer. And I meant it. I think that he and the team have opened a wonderful, friendly little bar which I am certain the good people of Elland(and beyond) will take to their heart....

What you need to know:
Name: Elland Craft & Tap
Address: 102, Southgate, Elland
Opening Hours: Thursday - Saturday 12 - 11pm, Sunday - Wednesday 12 - 10pm
Drinks: 5 Rotating Casks, 3 Rotating Keg; Speciality Lagers, Draught and Still Cider; Gin, Rum, Wine and Spirits, Freshly-brewed coffee
Food: None, but you are welcome to bring your own. The Thai restaurant next door is highly-rated
Disabled Access: Yes, through the door at the back. 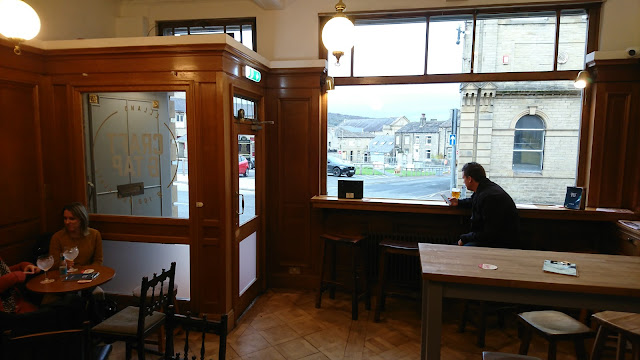