An Away Day to Altrincham and Other Stories.... 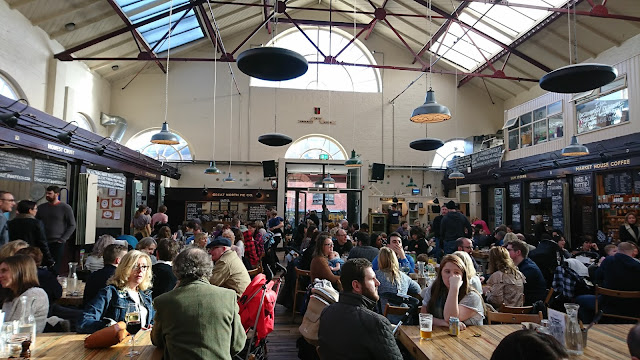 Last weekend I decided to go and watch my first away game of 2017, in fact the first I had been to for a few months. It was fairly local, only at Altrincham, and provided the opportunity to check out one of the up and coming places for beer in the Greater Manchester area.

We met up in Manchester, some of the lads getting the train from Halifax, whilst two of us met for breakfast at the Keys in Huddersfield. This is a deceptively large place, situated beneath the Parish Church on Byram Street, and the food was very good. They also have live music on from time to time on an evening. I noticed that Roger Davies and his Band are due on soon.

We got the train to Manchester, and met the rest at the Micro Bar in the Arndale Centre, where I had a pint of Dan's Pale Ale, which was pleasant enough, and from yet another brewery inhabiting the spaces around the Piccadilly Mile. The Micro Bar used to be owned by the now-defunct Boggart Brewery, but it is still as good now as it ever was. We wandered up to the ever-reliable Angel where I enjoyed a pint of Yolo from Fell, before we headed down to Shudehill and caught the tram to Altrincham.

For those that don't know, Altrincham lies 8 miles south-west of Manchester city centre, the last stretch of urban sprawl before it gives way to the rolling Cheshire countryside. It has some attractive parts to it, with some fine old buildings. One of these is the old market hall, which had been strongly recommended to me, and was the first place we headed to, and what a wonderful place it is. It is now basically given over to food and drink, with local, artisan fare of many types served from a number of places around the outer edge and big wooden tables in the middle where you eat it. There is table service, and as we enjoyed a pint of the house beer from the bar run by Blackjack Brewery, The Jack in the Box, we saw some fine food - pizzas, steaks, sandwiches - being carried past to be devoured by eager mouths. No wonder it was so busy, with people of all ages giving it a fantastic, family atmosphere. Well worth a visit. 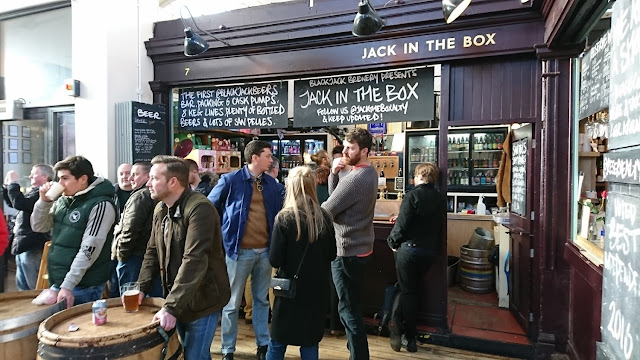 From there it was a minute's walk to Pi, where we were joined by more of our regular gang. It is a pleasant, friendly bar with a choice of 3 beers on handpump alongside some craft keg, bottles, and cans and draught cider. I opted for a pint of Tatton Blonde, from nearby Knutsford, which was very enjoyable, whilst a couple of the lads tried a Ginger and Apple beer from Wildside, the newly-launched experimental arm from Brightside, which was deemed to be OK.  From there it is a good 10-15 minute walk to Moss Lane, the home of Altrincham FC. The game was poor, to say the least, but with Halifax Town winning 1-0, we were prepared to overlook that! 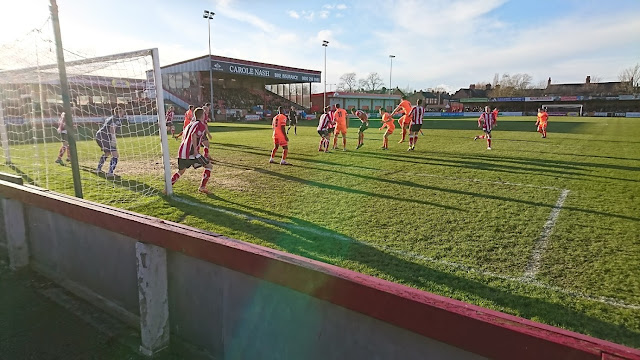 After the game we went to the historic area of Goose Green for a pint in the wine bar-like Costello's. This is the tap for the local Dunham Massey brewery, who are based in an old barn in the village near the estate of the same name, and who brew a wide range of pleasant, traditional-style beers. We conducted the usual post-match analysis over a pint, before moving on to one of the new bars that has opened up in the town recently, Craftsman. Now this is an interesting place, with a number of hand pumps and taps on the bar. One quirky feature is the fact that the hand pumps have numbers on them, and you identify the beer from the chalkboard behind the bar. Now personally I can't see what's wrong with the normal hand pump clip, but it is a point of difference I suppose! Anyway, that is only a minor quibble and it was here that I had my favourite beer of the day, a Single Hop IPA from the Stubborn Mule Brewery in nearby Timperley(birthplace of the legendary Frank Sidebottom). Weighing in at 5.7%, this was a beast of a beer, full of body and flavour. Delicious!

We headed back to catch the tram. I have to say I was quite impressed with Altrincham, having had some great local ales in some nice bars, and it is definitely a place that is worth a visit.

Back in Manchester, we headed to Pie and Ale, just off Lever Street on the fringes of the Northern Quarter. This was packed, with many tables full of people eating, as you might expect, various pie dishes. Now when I first started going to pubs, a pie and a pint referred to a cheap meal, with the pint more often than not accompanied by a sorry-looking, dried-out crust with a hint of meat somewhere in the middle if you were lucky. But it was cheap! Not the case these days, places like Pie and Ale, and pubs - like the previously-mentioned Pi - offering for example the Pieminister range of gourmet pies with interesting fillings. But of course, it comes at a price. And in Pie and Ale's case, this extended to the price of the beer, I had a pint of Jarl from Fyne Ales, which whilst it was excellent, was eye-wateringly expensive. To be fair to Pie and Ale, they do have their own house ale which is cheaper and they do offer discount to CAMRA members. So with a couple of caveats, a decent enough place to visit.

Moving on, we took in the familiar Crown and Kettle, followed by Bar Fringe. Both were very busy and as enjoyable as ever, and from there we moseyed on down to Victoria to catch the 9.26 train back to Halifax, where we just had time for a quick pint at the Pump Room before catching the last bus.

****************
Last week I popped over to Todmorden for the launch night of the town's new brewery, Eagles Crag. This was held at the Golden Lion, a pub I had not visited before, but encouragingly there were 4 handpumps on the bar, 2 featuring beers from Eagles Crag, with another one featuring Vocation. I was greeted by John Thompson, who combines running the canning line at Vocation with selling beer from the likes of Exit 33, Trinity, and, now, Eagles Crag. John introduced me to Chris, the new brewery's owner, who told me they were brewing at Robinwood Mill, the same place although not the in the same unit as the now-defunct Robinwood brewery. I tried a half of each of the 2 beers on offer, The Eagle Has Landed, a fruity 4.6% amber ale, and The Eye of The Eagle, a fruity 4.3% hoppy ale. Both were pleasant, traditional-style beers. There is also a blonde ale, but that was not available on the night. My best wishes to Chris and the team!

The Eagle Has Landed appeared at The Market Tavern in Brighouse last night, so I tried a pint of it. It was better than the first half I'd had last week, and seemed to be going down well with the Friday evening crowd. Talking of the Market Tavern, the 24th of this month is the pub's first anniversary. Hard to believe that this micro pub that has become such an integral part of the local scene has not been around much longer. It is a wonderful place, and if you haven't tried it yet, you should do! More on this in the next week or two....