Are Spoons in Need of a Stir?

Commenting on the results, Tim Martin, the Chairman of J D Wetherspoon plc, said: “I am pleased to report a year of progress for the company, with record sales, profit and earnings per share before exceptional items." So, on the face of it a cause for celebration and applause.

The first Wetherspoons opened in Muswell Hill in London in 1979, and they stayed around London for the first few years before expanding to well over 900 pubs across the country. Many of the original pubs featured the word 'Moon' in their name, such as Wembley's JJ Moon, and to this day, several up and down the country include the word, such as Manchester's Moon Under Water, and the Regal Moon in Rochdale. Incidentally, the 'JD Wetherspoon' brand takes its name from one of Tim Martin's teachers back in New Zealand.

Many Wetherspoons have been opened in spectacular buildings that have been the likes of banks, post offices, and cinemas, often listed buildings, often displaying spectacular conversions or restorations, and often with a name reflecting their illustrious past.  They may be newer buildings, part of new leisure developments, old coaching inns, or it may be an old timbered inn such the beautiful Lattice House in Kings Lynn.

There was a time when the arrival of a Wetherspoons in your area was a cause for celebration, a place offering a choice of beers, wines, spirits, and food, all at lower prices than you would find elsewhere. When the Richard Oastler - named as such following a suggestion from my late friend Colin Challender in recognition of the Victorian factory reformer and steward of nearby Fixby Hall - opened in Brighouse 1999 in a former chapel that had more recently  been occupied by an indoor market, it became the must-go-to destination in the town for many years, and at weekends it was packed. We enjoyed our pints of Hop Back Summer Lightning, a beer, like many on offer, not found in our area.

Wetherspoons adopted many new ideas, took advantage of extended licencing hours, were enthusiastic supporters of the smoking ban, and the cafe culture, all the time continuing to provide a generally cheaper offer for food and drink than virtually anywhere else. They have been a long-time supporter of CAMRA with discount vouchers and other benefits, all of which have been much appreciated.

But, increasingly, the formula is starting to look tired. Spoons have always tended to be light on staff as they are expected to cover serving customers at the bar, serving food, clearing glasses, and cleaning tables, and there has always been a tendency to have less people on than are required at busy times. This means queues, even when much quieter, build up regularly. And then there is the frustrating times when 'Coming Soon' is the most common name on the handpump clips, or when you are waiting behind someone who is ordering food, or a coffee when the person serving departs to sort the hot drinks, with the queues building up. OK, many people put up with it when taking the price into account, but in an age where people expect increasingly better service, it is starting to wear a bit thin.

The fact that service seems to have got worse recently was highlighted by my experiences the other week. We went for breakfast at one of the local Wetherspoons before heading off to football. We waited and waited, clearly they were under-resourced. And when it finally turned up, arriving in twos and threes so by the time I got mine everyone else had finished, it was inedible. Slapped on a plate with brittle toast that had been left under a heating lamp for ages, with a broken yolk and stray beans here, there, and everywhere, it was a forlorn sight.

We stayed overnight that night in Shrewsbury, and after wandering around town on the Sunday morning, we decided to risk another Spoons breakfast. We went in to the place, a guy was on the bandit, a couple were sat by the window, but there were no staff to be seen. We waited. And we waited, before giving up the ghost and heading off to the next place. Now this was another Wetherspoons, but also a hotel, so we reckoned we'd have a better chance. And we did, pleasant staff took our order, the food arrived quickly and was very nice in terms of both presentation and quality. But why should it have taken us 3 attempts to get a decent breakfast?

Other players have come into the market, with cheap drinks and food on offer in so many places, or offering a fresher offer and environment, be it other pubs and pub chains, or just the local cafe or restaurant. Like many large organisations, Wetherspoons seem to have become set in their ways and less nimble and therefore less able to adapt to changing trends. As an organisation they seem to have got out of touch with their customers - the withdrawal last year of Sunday lunches - always very popular - meant several people I know changing their destination. And if you then get better service elsewhere and a better quality product as well, then you may be persuaded to change your allegiance, particularly if you can afford to do so as well.

So whilst the financials may keep the city and investors happy for the time being, unless Spoons catch up with the market, invest more in staff and resources and stop the apparent slide in quality, I do wonder if it will be the same story in another year's time. Watch this space.... 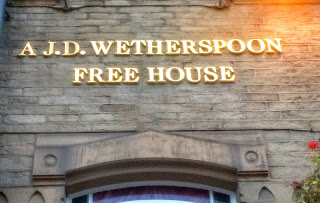