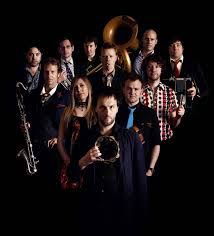 My first memory of visiting the Victoria Theatre in Halifax was, I would guess, when I was about 9. I was taken to see some musical called 'Merrie England', which I suspect might have been written by a bloke called Edward German. My overriding recollection of that visit was of being bored rigid, and so my first visit to the venue was not the most auspicious!
Over the years, though, I have been back to the place several times for a number of gigs and events, and have come to appreciate the plush grandeur of what is a most impressive auditorium. On this occasion the staff were unfailingly polite and courteous, which made a big change from some venues where 'security' are in charge with a default stance that everyone is out to cause trouble. My only grouse was that, whilst it is great that they had a real ale on offer, it was a 3.5% light beer which cost a ridiculous £4.00!
I had gone to see Bellowhead, behemoths of the folk scene, perform one of the gigs on their farewell tour. This is no typical folk act: the huge truck shifting their gear that was parked opposite the Victorian Craft Beer Cafe, and the massive sleeper bus parked on the other side of the building were testament to that.
For those that don't know them, Bellowhead have over the past few years introduced folk music to a much wider market, not by compromising the traditional aspects of the music but by making it sound fresh both when recorded and, even more so, in their amazing live performances. Bellowhead live were guaranteed to get even the most reluctant feet moving, indeed they were responsible for the only mosh pit I have ever seen at a folk gig! They were a band where it was obvious that they thrived on playing live, and within touring schedules that lasted for months at a time they played such diverse places as Glastonbury and the Proms. Their music had a very English feel to it, with traditional tunes and shanties, played on a wide range of instruments ranging from the usual fiddle and guitar through brass to an amazing array of percussion that could include frying pan and coal scuttle!
The band started out in 2004, but it always worked on the basis that it was a loose collective rather than a permanent group. The band's members - including Boden, John Spiers, Benji Kirkpatrick and Sam Sweeney - frequently performed and recorded elsewhere, and one could argue that this enabled Bellowhead to benefit from the external influences and ideas that flowed from these activities.  That is no doubt one reason why they only recorded 5 albums and the odd EP in 11 years, but in that time they won numerous awards and were nominated for many more.
As I was waiting for the band to come on, my mind went back to that first visit to the place. Ironically, a certain bucolic, 'Merrie England' theme - conjuring up images of innocent times before the Industrial Revolution kicked in - runs through much of Bellowhead's music, with songs like 'Betsy Baker', 'Rosemary Lane', and 'London Town' referencing times gone by. Then you get songs like 'Roll Alabama Roll', 'Haul Away', and 'Gosport Nancy', which reflect our seafaring traditions. You could never mistake Bellowhead for an Irish or Scottish band, for example, even if some of their songs may have originated outside of England!
The band came on stage to a rapturous welcome from a packed auditorium, with spare seats at a premium. They were at full strength, with all 11 members of the band there on Monday, including their frontman and main singer, Jon Boden, whose decision to leave triggered the decision by the rest of the band to call it a day. Other members present included such folk luminaries as Sam Sweeney, Benji Kirkpatrick, Rachel McShane, and John Spiers, with the usual wide array of instruments, which enables them to create a unique and distinctive, but still traditional, sound, with nods towards burlesque and music hall.
The band immediately got into the swing of things with songs like 'Roll the Woodpile Down' and 'New York Girls', with the audience rocking away and loving it. The band just don't keep still, with the brass and wind playing members of the band impressively mobile with the odd sousaphone wrapped around themselves as they provide an accompaniment that can at times veer towards the Memphis Horns and the Nutty Boy sound of Madness. Bellowhead have rarely played it straight, they give each song their own unique treatment, and this can mean it frequently heads off in directions you wouldn't expect!
The band were on for about an hour and forty minutes, the atmosphere at times reminiscent of the Last Night of the Proms, and they played two encores, before leaving us to disappear into the night, having witnessed a fantastic night of excellent music, brilliant musicianship, and exhilarating showmanship. The band then headed off to a well-known Halifax pub for a much deserved after-show drink, where they also played a few tunes. And then no doubt crashed out in that big tour bus en route to Northampton or wherever!
Bellowhead will be a great loss to the music scene, although individually they all have other projects and bands that means we will still be able to see them in bits. But they were able to reach out and appeal to a much wider audience than traditional folk bands, and that has been a fantastic achievement. Their live performances have been so strong they have been able to appeal to so many, and it is a great band that are able to do this.
Bellowhead, you will be missed....