The problem was I'd been to see Simone Felice in Leeds the night before and had been totally blown away.

Beach House, from Baltimore, Maryland, a band I've liked for a few years now, and had wanted to see for a while, just happened to rock up at the wrong time, as I was still caught up in the previous night's music.

After an intimate gig in a small, cosy venue like the Brudenell Social Club, in front of maybe 150 people at most, where we were able to chat and pose for pictures with the musicians for a while, and then going to a sell-out event with 1,500 people at the Ritz in Manchester the following night when the band kept themselves remote and in the dark with only the backdrop being illuminated was not really where my head was!

Which, with hindsight, is probably not a fair reflection. I managed to get a good space on the top balcony, at the front with a good view. The band came on, played a lot of tracks off their new album 'Depression Cherry', a few older tracks from albums like 'Bloom', but not my favourite of theirs, 'Lazuli'. Their musical style had changed, the sound was more guitar-based, less of the shimmering keyboards and dreamy vocals I was expecting.

So, I wasn't as favourably disposed to the band as I had been before. But, that's probably a bit unfair. I asked myself if I hadn't gone to a gig the night before, would I have enjoyed it more? Would I have taken their sparser, more guitar-based approach as a positive new direction? Would I have accepted them not playing 'Lazuli' when they played a few other favourites from the last album and some good ones I'd not heard before? Did I enjoy the clever use of lighting to accompany the band? Well, I suppose, the answer to all of these questions would have to be a 'Yes'.

To be fair to Beach House, they obviously have a much bigger following than I realised and they went down really well. The fact that nobody I mentioned the gig to before I went had heard of them gave me the view they were still very much on the fringes, although I found out today that Scarlett from work really likes them. So I do know another fan!

I have a copy of their new album which I will be listening to over the next few days. And I am probably going to enjoy it. But, as this wasn't played at the gig, here's a link to my favourite track of theirs.... 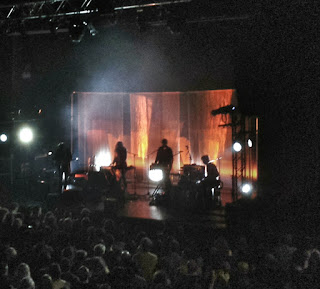 Update: Just listened to their latest album, 'Thank Your Lucky Stars' and it is brilliant! This is a band that took ages between albums and then release 2 in 2 months! But as it's really good - and better than 'Depression Cherry' -  I can forgive the little tinkers!

The new album by Beach House, 'Thank Your Lucky Stars' is out now on Bella Union records.
Visit beachhousebaltimore.com for more information.