A Couple of Halifax Classics....

September 12, 2020
I have recently visited two of Halifax's favourite traditional pubs and found they are both adapting well to life in the new normal.... 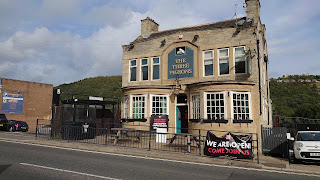 Back in the days before a number of new bars and micro pubs opened in the town centre, one of the main go-to places for lovers of real ale in Halifax was the Three Pigeons, a traditional 1930's former Websters house situated a few minutes walk from the railway station. With its proximity to the Shay, it is a favoured watering hole of the town's football and rugby supporters for pre- and post-match refreshment. I have been going in there for years but with it not opening immediately when pubs were released from lockdown - owners Ossett Brewery phased in the re-opening of their pubs - I only managed to pay my first visit since March a week or two ago.

In fact, the Pigs was one of the last pubs I went in before lockdown began. In those eerie few days after it was announced pubs were to close, there was a strange half-world where some pubs were selling their beer off for take-out. So it was a scramble to find pop bottles, jugs, jerry cans, etc. that could contain a few pints of draught beer. I called in, handed over an old lemonade bottle, and waited as my Yorkshire Blonde was pulled. At that point it was a clinging to a part of normality, but it wasn't for long; a couple of days later pubs were closed completely, much to the concern of customers, landlords, and brewers. It was the start of lockdown.
The Three Pigeons is renowned for its Grade 2-listed Art Deco interior. The pub was opened by Samuel Webster  in 1932, becoming a free house as Websters disintegrated, and then, in 2005, was bought by Ossett Brewery. Work on the pub when they took over revealed a classic beige and green terrazzo floor in the unusual octagonal lobby beside the bar as you walk in to the pub. From this a number of rooms fan off. A snug is off to the left, a lounge to the right, a taproom also off the lobby. Down a corridor there is a further small tastefully decorated snug with seating and a more spartan games room with a dartboard. Wood panelling runs throughout the pub, and above the lobby is a mural featuring three pigeons which was added during the 1980's.

When it was announced towards the end of July that the pub was going to re-open I was curious as to how the new requirements for pubs would work for the Pigs. After the football, for example, the lobby is a scrum of bodies eager to get a drink to celebrate or console themselves on the result, although restrictions on crowd size when fans are eventually allowed back into The Shay has put that consideration on hold. But would the pub have added screens, warning tape, and the like and ruined the classic look of the place? It was a week or two before I got the opportunity to find out.

What I found was a spotlessly clean pub with plenty of notices clearly saying what to you needed to do. A wooden spoon in a bottle with a number, a slip of paper for your details, and a pen were placed on each table. There was no clutter; no newspapers, no magazines. On the bar, clear screens had been added, their wooden frames discreetly complementing the look of the pub. The staff were wearing visors, serving your beer via the bar in the snug at the side of the lobby. It was all pretty impressive, the beer too being as good as at any time I can remember in the last few years.
Meanwhile, about 20 minutes' walk away, another classic pub was even later opening its doors. It was early August before The Cross Keys at Siddal finally opened for anything other than take-outs. This is another popular traditional former Websters pub which has thrived as a free house since landlord Hugh Kirby took over, winning numerous awards and attracting a loyal group of locals and visitors alike. Here, though, it wasn't just preparation for the post-lockdown world which had caused the delay: there had been the small matter of dry rot to be dealt with and the conversion of the small room behind the bar into a comfortable snug complete with a bar to replace the previous serving hatch.
It is very tastefully decorated, with a subdued colour scheme, dark wood tables and chairs, and a fireplace complete with stove. On the mantelpiece there is a 1950's-style clock, and candlesticks at either end, with a retro-style mirror above. 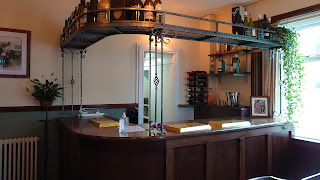 The new bar is in perfect keeping with the look of the room; curved with dark wood and an upper shelf. No hand pumps or fonts are on the bar, with draught beer brought in from the main bar. A few bottles of spirits are placed on the shelves above and behind the bar, with the obligatory bottle of sanitiser. It is uncluttered with a trailing plant tumbling out of the upper shelf. As I sipped an excellent pint of Neepsend Serine I felt relaxed; this has added another dimension to the Cross Keys to go with the sitting area facing the bar, the space in the main room in front of the fire, and the upper part of the room beyond.
A bottle of sanitiser and a book to sign in with your details are waiting for you on a table as you enter the pub. There is no service at the front of the bar; orders have to be placed at the side. Tables have been spaced out and there is a one-way system in operation, but chatting to Hugh they were still reviewing and tweaking the processes as they go along. The corridor leading to the back has been stripped back to the stone work and an old Tetleys lamp added. Outside, a huge marquee covers most of the space in the slightly-extended drinking yard where a number of picnic tables are spaced out at intervals. It all is very impressive and with beer as good as the Neepsend on offer I plan to get back there as soon as possible. 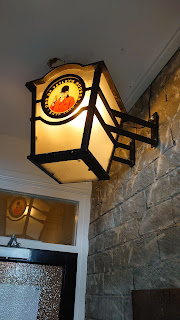 And finally, news that Nadine and Damian, owners of Calan's in Hebden Bridge, have sold the pub to the people who have The Pub micro pub in Todmorden. Calan's will be no more, and when it re-opens in a week or two's time it will be known as The Pub Hebden. Sadly I never got the chance to call at Calan's before they moved, so I would just like to offer my best wishes to Nadine and Damian with their new venture. They are moving to the Yorkshire Dales to take on a cafe bar in the beautiful village of Clapham, so hopefully I will get the chance to call in when I am next in the area.