December 11, 2019
"It's coming on Christmas, they're pulling down trees, they're putting up reindeer, they're singing songs of joy and peace." 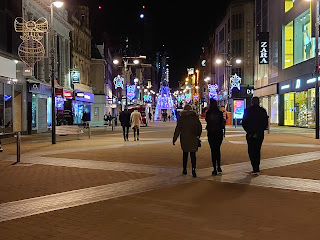 So sang Joni Mitchell in the opening lines from The River, from her classic 1971 album, Blue.

A song about escape, getting away from an unbearable truth, the reality of day-to-day life. Which in many ways, for so many people, is what Christmas has become these days. "Oh I wish I had a river to skate away on" is the next line in the song.

We're in December now, so fair enough, but it seemed this year everything kicked off earlier than ever. I encountered my first Christmas beer as November 16th in the Half Moon in Darlington, and whilst I haven't seen many since, I am sure there will be plenty lurking around the corner, waiting to be unleashed on a fair proportion of the nation's bars. I wrote about my aversion to Christmas-themed beers a few years ago, and my view has not changed one bit. The shops seemed to get started earlier too, and the decorations seemed to be out their sooner than ever too.

But aside from that, for so many, Christmas is a time for the good times. Seeing the family, time away from work, catching up on box sets and old familiar films and TV shows from yesteryear. The music from our youth takes over the soundtrack. Old favourites, that familiar refrain, well here it is Merry Christmas, everybody's having fun. An escape from the day to day. And I think that this year with the country in its most miserable and fractured state that I can ever remember, Christmas can't come soon enough for so many of us.

These thoughts were swirling around in my head as I was walking around Leeds over the past couple of days. I was here to see one of my favourite bands, The National, a bit of Christmas shopping, and a wander around some of the city's pubs and bars.

I lived in and around Leeds for 10 years and worked in the city for longer, so I always thought I knew it well. But the city is changing apace, new buildings there or under construction. And with plenty of new bars to boot.
First up for me was the conveniently located North Brewery Tap, right opposite the hotel, where I enjoyed a half of Golden Milk, a 6% apricot sour spiced with cinnamon and turmeric. I loved the ambience here, as I did at Tapped, where I had been before, but with a pint of Fortitude from Bristol Beer Factory and a searingly-so Really Hot One Pizza, I was a happy bunny. Although I felt the effects later....

I visited a pub I hadn't been to for years, the Templar on Vicar Lane, essentially a long room with several different drinking areas and booths, with a great atmosphere, nice beer, brilliant service, and value for money, a classic ex-Melbourne's pub which is still very much as I remember it back in the 80's. I popped in again the following afternoon, the beer was even cheaper - £2.30 for an excellent pint of Kirkstall Three Swords, the pub was busy, and the guy working on his own behind the bar did a brilliant job, patrolling the bar, checking if anyone was waiting, acknowledging who was there. It was an exemplary display of customer service that so many places don't come anywhere close to matching.
I saw The National, who somehow seemed to fit the mood I was in. They were performing at the First Direct Arena, a venue I had last been to a few years ago when I saw one of my heroes, Neil Young. They played tracks from their latest album, I Am Easy to Find, their melodic sound embellished by the addition of a couple of female singers, including Kate Stables from This Is The Kit, whom I had last seen performing last year at the Square Chapel in Halifax!

The gig ended and I drifted down deserted streets to the broad expanse of Briggate, and went for a final beer at Whitelocks, tucked away down one of the yards. This classic old pub, dating from 1715, is a place I used to call in regularly, and whilst never the cheapest, I was slightly staggered to be asked to pay £2.50 for a half of Landlord Dark! I also tried a half of Herald Pale Ale from Meanwood Brewery, quite pleasant, and a relative bargain at £2.10 a half. It is now part of a family of pubs connected to London brewers, Five Points Brewing, so whether that has influenced the current pricing policy, I don't know. Still well worth a visit though.
The following day, I encountered Christmas full on as I walked in to the sprawling Trinity Shopping Centre which covers swathes of the city centre. Shoppers, Santas, Trees, Elves on shelves were all in abundance. Christmas shopping done, I headed up to North Street in bright December sunshine, and called in a couple of close-together pubs, both which were oases of calm after the bustle of the shops. First up was the Reliance, back in the Good Beer Guide, and with a pleasant Monday lunchtime chilled-out vibe, with a steady flow of people popping in for a drink or bite to eat. Stripped woodwork with subdued colours, a great soundtrack, and decent beer from Sunbeam.
Just along from the Reliance is a place that was new to me. This is the Brunswick, and whilst the former is all muted colours, its neighbour announces itself with bright, bold paintwork on the exterior. Inside, a pleasant light and airy room with plenty of windows and 6 hand pumps. Beers included a number from Kirkstall, plus Vocation, and a collaboration between Wylam and Deya, a pleasant ruby ale of which I sampled a half, before going for a Kirkstall Pale. I got chatting about beer and pubs with the bloke behind the bar and the only other person who was in there when I arrived, a guy forced to go alcohol-free as he was waiting for some test results. I liked the Brunswick, probably the best cask of the visit, and a nice friendly welcome.
It was getting time to head homewards, so I went back to my hotel to collect my bag. I did though manage a quick half at the Scarbrough taps, another regular haunt of days gone by before I caught my train back home.

It's coming on Christmas....