September 03, 2019
A lot has been going on in the local area recently, including a new bar opening with another to follow.... 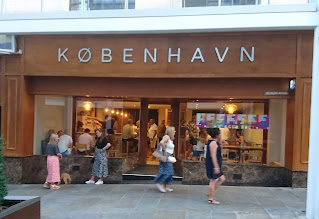 It was the annual Indyfax Festival in Halifax last weekend, and once again it was a great way to spend a bank holiday weekend. The festival is run over a number of bars across the town - the Victorian, Grayston Unity, Alexandra, the Lantern, with the former Pump Room previously being involved - and this was its 3rd year. If you enjoy great beer in some excellent bars, you couldn't go wrong. And whilst I didn't come across a beer this year that stood out as much as the stunning pint of Arbor Zero Zero that I had at the Victorian last year, there were still some mighty fine ones to sample!

And what helped this time was the opening of a brand new bar. We said - well, we would if we spoke Danish - velkommen til København - brought to you by Simon and the team from the serial award-winning Victorian Craft Beer Cafe located just a few streets away. And as a complete contrast to the Victorian's dark wood and plush interior, København is all Scandi-cool: light wood, pastel shades, and spacious with it, spread over a couple of former retail units in the bustling Westgate Arcade, different to anywhere else in the town. OK, it is still work in progress, it is a bit loud and clattery and in wait of some soft furnishings and sound-deadening embellishments, plus the upstairs room isn't finished, but even in its unfinished guise,  I liked it. The beer I tried - a Squawk Indyfax Festival special which was available at all the participating locations - was superb, a hazy, unfiltered gem, and was from an array of around 6 cask beers served along with a similar number of taps. I went back with our Tom the following day, and my next door neighbour went in last Saturday and then told me over the hedge this weekend that he had been in again and thoroughly loves the place. And I can't disagree, København has already picked up plenty of complimentary comments from people in and around the town, and looks set to become a key player in what is already a thriving bar scene in Halifax.
A few minutes' walk away from København is the Alexandra, where the friendly and tiny beer and bottle bar opened up their roof terrace for the first time, which was packed when I sneaked up for a peek last Sunday. OK, the weather helped, but it is another example of the enterprise shown by Ben and the team, with a new food venture called Glør - Norwegian for ember, another Scandinavian reference - opened recently next door to the Alex, and by all accounts the food is very good. 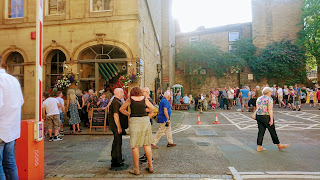 Meanwhile, across town - although it is only a few minutes' walk away - at the Grayston Unity, things were very busy over the weekend and especially so on the Sunday, when music was very much on the agenda. Local band the Casino Rockets and Sheffield-based Allofusinlove - who have supported Muse on tour - were both excellent as they played outside at the back of the bar, and with the warm sunshine it was a most pleasant way to pass a bank holiday Sunday. And soon, the Grayston experience will be available elsewhere in the town, as they open their second bar, the Meandering Bear, later this month, across town on Westgate, near the top entrance to the Piece Hall. It won't simply be a case of Grayston Mark 2, but I am sure it will have the same warm vibe that marks the Grayston out as one of the friendliest bars around. And it means that part of town will have another outlet and provide the opportunity for a fantastic uphill - or downhill crawl depending where you start - from the Square Chapel bar (which was not part of the Indyfax festival), taking in the Meandering Bear, København, The Lantern, the Alexandra, and the Victorian. Surely there can't be a town or city in the country with so many options in such a small area, which would take no more than 10 minutes to walk if you didn't call in any of the places!
However, apart from these new arrivals, there are also a one or two departures. I was in Hebden Bridge over the weekend and we called into Drink? where owner Martin will shortly be moving on after several years of running the popular bar. Martin, who has worked in the area for a number of years at both Elland and Bridestones breweries before taking on Drink?, lives in Barnsley and understandably has tired of the long journey and the time spent travelling. Martin worked tirelessly to get the bar re-opened after the floods that devastated the town on Boxing Day, 2015, and the place has never looked back, being opened out into 2 rooms downstairs with the shelves of bottles and cans and a seating area as you go in, with the bar in the back room selling a mix of cask and craft, as well as a room upstairs. I have always enjoyed my visits over the years and chatting with Martin, who has supported many small and often unseen breweries around these parts over the years, and I wish him well at whatever he does in the future. Drink? has been sold as a going concern, and I look forward to visiting it again when the new owners take over.

One of the breweries that Martin has consistently supported over the years is Manchester's Blackjack, where founder Rob Hamilton announced recently that he is moving on. I first came across Rob several years ago when he worked behind the bar at the Marble Arch before leaving to set up his own brewery in 2012. Blackjack are a brewery that have consistently delivered some of the best beers around, with their pub, the Smithfield, on Swan Street, in the Northern Quarter being one of my favourites in the city. I am sure Rob will pop up again soon doing something beer-related, and I wish him all the best for the future.

And following on from my recent blog in which I wrote about visiting Donkeystones Brewery Tap in Greenfield, the brewery announced on their Twitter feed last weekend that the tap would be closed for the foreseeable future. No reason was given, and it's a shame, it was a most pleasant place to call for a pint. Hopefully it won't be too long before it opens again.

So plenty going on, with more to follow in the coming weeks....