September 23, 2019
A stylish new bar has just opened up in Halifax, with something of a story behind the unusual name.... 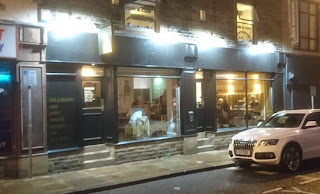 Halifax's latest bar, intriguingly named Meandering Bear, has just opened up on Union Street, situated between the Piece Hall and bustling Westgate Arcade. It is brought to you by Michael and Jess Ainsworth, of the town's Grayston Unity in partnership with an old friend, local businessman Andrew Murphy. The idea came about over a few beers in a bar in Malaga and after several months of hard work, the bar finally opened its doors last week to much interest in the town. It has already seen masses of people coming along to have a look. And whilst inevitably some will have come simply out of curiosity, all the signs are that a good proportion of them will keep coming back.

And what will they find? Well, if you are thinking Grayston Mark 2, think again! It couldn't be more different. A classy bar created out of an old shop unit that had been last used as an amusement arcade 15 years. A stylish black exterior with subtle graphics and a hanging sign depicting the outline of a bear's head in a glowing warm orange-gold. Inside there is much wood panelling, light pastel paintwork offset by dark green, sympathetic lighting, fixtures, and fittings giving a comfortable and relaxed ambience to the place, much of the look down to Jess's excellent eye for detail. The room is split-level, with seating and tables as you go in through one of the two entrances, with the bar at the back of the room on the higher level. 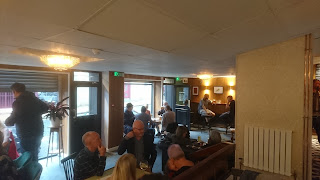 The wood-topped bar features 4 hand pumps serving cask ale, with Hawkshead Pale as the regular cask, with beers from Roosters, Fallen, and Bad Seed providing the rest of the range on this visit. There are 7 taps featuring lager from Ayinger and cider from Hogans, and 5 keg lines, with one regularly supplied regularly by Manchester's Shindigger brewery. There is a window at the back of the bar providing additional light, in front of which are a mix of glass and wooden shelving featuring a wide range of spirits, with a selection of wines and bottles and cans also available from the chillers. 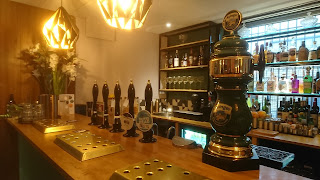 Unlike the Grayston, food is available, featuring the likes of cold meats, cheeses, and snacks along with toasted sandwiches, with the aim to source as much as possible from close to home in order to support the local economy and suppliers. And I have to say, I am pretty impressed with it all. The place looks fantastic, there is a great atmosphere, and the beer has been excellent so far, with the plan being to normally offer a different range to that in The Grayston. Yesterday I popped in and loads of familiar faces kept coming in, and all seemed to be impressed. Many of the team from the Grayston will also be working some of the time here, and one of them commented on how much more room they had to work in behind the bar at the Meandering Bear. 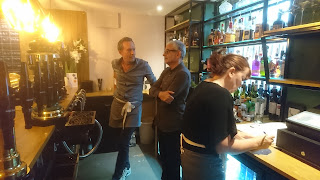 So what about the name? Well, Meandering Bear recalls an incident from the brief period when Halifax had a zoo back in the early days of the 20th century. It was based just outside the town at Exley, and whilst it drew large numbers of visitors following its opening in 1909, it only remained open for a few years. It was beset by various problems, one being somewhat lax security which meant there were escapes by some of the residents on several occasions. A large elephant would break free, normally falling asleep fairly soon near the zoo gates, but in one incident, residents of nearby Siddal awoke one morning to see a large grizzly bear ambling down the street. The story of the Meandering Bear is told in a specially-commissioned poem by local poet Keiron Higgins, which is featured on one of the walls in the bar.
And so, with Meandering Bear - which opens every day apart from Mondays - Halifax has once again gained an excellent new bar which adds to what is already a very healthy pub and bar scene, and which provides yet another reason to visit the town!

****************
And last Saturday, close to where the afore-mentioned bear went meandering, is another event I must mention. Hugh Kirby, landlord of the ever-popular Cross Keys in Siddal, got married to his partner, Georgie, at a packed St Mark's Church a few minutes walk away from the pub. The reception was held back at the Keys, with plenty of superb beer, a hog roast, and entertainment from the Zephyr Band, with Georgie, the daughter of New Orleans blues pianist and singer Champion Jack Dupree, who lived in Halifax in the 1970's and 80's, taking lead vocals for a time. It was a lovely day, the weather being very kind, and I would just like to take this opportunity to wish Hugh and Georgie a long and happy life together....