February 15, 2019
Chesterfield may be best known for having a church with a crooked spire, but the north-eastern Derbyshire market town is also home to some fine pubs.... 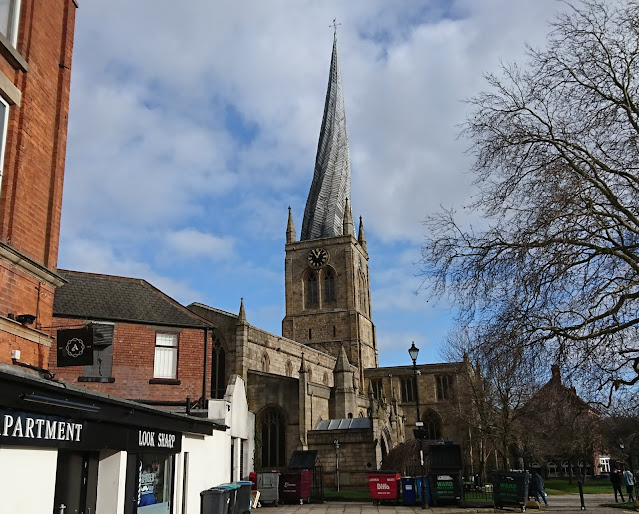 We spotted the twisted tower as the train from Leeds approached Chesterfield. We had just seen the floodights of the Proact Stadium, the home of Chesterfield FC, who Town were playing later in the afternoon. We disembarked from the train and walked up into the town centre, past the delightfully-named Pomegranate Theatre, where around the corner was the church of St Mary and All Saints with its amazing crooked spire which leans and twists almost 3 metres from the perpendicular. This has been attributed to various causes: the use of unseasoned timber, the lack of skilled craftsmen at the time, and insufficient cross-bracing. Whatever, the reasons, it makes for a spectacular sight as it sits proudly overlooking a town with an unexpected number of attractive buildings and streets with historic names like Steeplegate, Glumangate, and West Bars.

A beer was in order, so we stopped at a pub called the Rutland, which advertised CAMRA discount, so we reasoned that there was a good chance there would be some decent beer available. We weren't wrong, as we were greeted by a welcoming bar with 8 hand pumps and a friendly landlady.
Most of us opted for a pint of Ay Up from Derby-based brewers, Dancing Duck, a lovely, pale session beer at 3.9%, a great way to start the day. The Rutland is not in the Good Beer Guide at the moment, but on this showing is a lot better than many that are.

We decided to go to the Neptune Beer Emporium next. Now this is in the Good Beer Guide-listed pub, and sounded appealing from the description in the book: "Now a free house and a self-styled beer emporium, this is a compact back-street local serving an excellent range of beers in two drinking areas either side of a central bar." According to the app it was 0.71 miles away, so not far. We couldn't quite work out the way to go. We asked an oldish guy in the street if he knew where it was. A flat East Midlands accent replied "Sorry, me duck, I don't know that one."  So reluctantly, I turned on Google Maps. Now, I don't like using it unless I really have to because (a), I am not convinced it always takes you the most direct route and (b), it drains your phone battery. After what seemed like a very long 13 minute walk, with my phone charge dropping alarmingly, we arrived on St Helen's Street, and tucked away amongst the quiet terraces was our destination.
A solid brick and stone building was inviting us to go in. The beer pumps were on the bar as we walked in, featuring local beers like Welbeck Abbey, Drone Valley, Peak, and Dancing Duck, although they unusually weren't displayed on the chalkboard in the drinking area to the left as you go in!
Having enjoyed the Dancing Duck at the Rutland, the beer drinkers amongst us went for their #wetfebruary, "a scrupulously hoppy pale ale" according to the pump clip. It was 4.2%, ABV and was in excellent condition, refreshing, delicious, and very moreish. I would rate it at 4.5 on the NBSS scale, and it is the best beer I have had so far in this short year. So good in fact that I had another, and then another half while we waited for the taxi. One of the lads was hungry and enquired about food. There was only sandwiches on, but the friendly lass behind the bar said she would happily make whatever variety we wanted, within reason. So we all succumbed. And she made them up on the shelf at the back of the bar. I have to say my cheese and onion, at £2, was excellent.
I loved the Neptune, it was nicely done out, comfortable, and nothing was too much trouble for the friendly staff. A taxi number was provided, the rugby was turned on, the customers needs were all well looked after. And I have to say this friendly, back-street local is the best new pub I have been in all year, and I need to find an excuse to go back to Chesterfield for another visit!

Our taxi finally turned up to take us to the Proact Stadium, a new-build which has been the home of Chesterfield FC for a number of years now. We needed to buy our tickets before we went in, so we did that and then went for a quick pint at the Glass Works, the pub opposite the ground. I had spotted the writing on the pub wall which said it sold Brampton Ales, one of Chesterfield's local breweries, when the taxi dropped us off. We walked into a sea of bodies, almost all wearing football colours. It is a small building, and appeared to just have the one bar, although I spotted one outside through the door when I went to the loo a bit later. But despite being busy, the 3 staff behind the tiny bar managed to serve everyone pretty quickly and in the right order. There was about 7 beers on hand pump, most from Brampton, although I did spot one from Nottingham's Magpie Brewery, Thieving Rogue. Apart from our cider buddy, we all went for the Golden Bud. This was a 3.8% golden bitter, and whilst it didn't hit the heights of the Dancing Duck, it was pleasant enough. Brampton started brewing in the town in 2007, but it seems there was a previous brewery with that name which closed in 1955. The Glass Works was fine for a pre-match pint, but whilst there were plenty of fans of both teams, several people I know visited one or two of the other pubs close to the Proact, such as the Beer Parlour, which is in the Beer Guide, and the Derby Tup, a Castle Rock pub, which is having a sabbatical.

And so to the match. And as is sadly the case sometimes, 90 minutes of football tried its best to ruin a good day out. I won't bore you with the details, but suffice to say, Chesterfield won 1-0 through a penalty scored by one of our former players, and Town wouldn't have scored if the game was still going on now. And there was a freezing wind!
I had booked a taxi to pick us up after the game, and sure enough there was one waiting at the end of the match. We asked if he could take us to the Chesterfield Alehouse, the first micro pub to open in the town some 5 and a half years ago. No problem. We arrived, I took the obligatory photo as the lads walked in.
I joined them inside, there is some seating as you enter, but it is a split level room with the bar up some steps. There is also a further room upstairs with additional seating. We were greeted by a friendly bloke behind the bar. As we were deciding which beer to have, my phone rang. "Taxi for Chris, are you coming for it?". I said we had already been picked up and had arrived at our destination. Looks like we got in the wrong taxi! I apologised, and as the call ended I decided to go for a pint of the Ekuanot from another Derbyshire brewery, Ashover, with their distinctive leaf-shaped pump clips.
We went back downstairs for a sit down. The beer was good and it was yet another enjoyable pub, with good beer and friendly customers. When we decided we ought to think about getting back to the station, the landlord kindly rung for us(I didn't want to push it after the earlier confusion!), and despite a few nerves when the second taxi didn't immediately appear after the first, we were back at Chesterfield station to get the train back to Leeds, and then Huddersfield.

We had a quick pint at the Kings Head when we landed back at Huddersfield before heading off in our respective directions. It had been - bar the football - a really enjoyable day in a town with some good pubs, great beer, and friendly people....