Nail My Feet to The Heart of the Town....

September 08, 2018
A weekend of great music, along with a tour taking in some excellent pubs and interesting beers in one of West Yorkshire's best drinking towns....

One of my favourite albums of 2017 was 'Youth Detention' by the wonderfully-named Lee Bains lll and The Glory Fires, a band out of Birmingham, Alabama. I hadn't heard them on the radio, but I liked the sound of them from a review I read about the album. A few weeks later, I was in Newcastle, and I picked up a copy of the album from HMV in the Intu Shopping Complex. I was heading up north to the coast, so when I set off I put the CD on in the car. From the first ringing note, I was hooked. As I drove through the northern suburbs of the city, the opening tracks blasted out, a wall of feedback-enriched driving Southern rock performed with a raw passion and sheer energy I'd not heard all year. By the time I hit the A1, I had turned the volume up several times, and by the time I pulled into the car park at Low Newton-by-the-sea, I was already on my second listen. What a journey....

I needed to see them live, you just knew they would be brilliant. I spotted that they were on in a few weeks time at the Cluny in Newcastle. Wonderful, I thought, but then I realised that it would be impossible to get there as it was a work night, and I wouldn't be able to take a day off because it was school holidays and my colleagues were off. So I checked out where else they were playing. London. And London. So, no chance then. I duly settled down to months of listening to the album.

Imagine my delight when I was in The Lantern in Halifax the other week and I spotted a poster advertising Lee Bains lll and the Glory Fires. Next Saturday, FREE ENTRY. I did a double-take, rubbed my eyes, and looked again. Yes, it was true. I spoke to the boss, Ben, and he said it was free because they were having to play in the downstairs bar due to the upstairs venue being booked up for a private party.

Saturday evening duly arrived, and I landed at the Lantern to find that the gig was upstairs (mix up over dates, apparently), and whilst there was a reasonable crowd up there, it wasn't packed, so once I had got myself a pint I had no trouble getting up to the front. We didn't have long before the Alabama foursome emerged on to the stage and launched into their first track. Bang!

For an hour they played, mainly tracks from 'Youth Detention'. Tracks like 'Break it Down', 'Nail My Feet to The Southside of Town', and 'Crooked Letters'. Songs in a Southern rock style, but with lyrics far removed from the usual Good-Ole-Boys redneck philosophy. Lyrics with a thoughtful social conscience at their core, with Lee delivering them part sung, part in the style of a Baptist preacher. They were loud, very loud, and it took until Monday before I got my hearing fully back, but this was one of the most exhilarating live performances I have seen in years. I managed to catch up with Lee and the band after the gig, really nice guys, although the Alabama and Yorkshire accents did cause some mutual confusion at first!

I was back at The Lantern less than 24 hours later, as the wonderful Plumhall were playing the Sunday teatime slot. I had last seen Plumhall, comprising the husband and wife team of Nick Hall and Michelle Plum, earlier in the year, when they played here supporting ex-Icicle Works frontman Ian McNab. They were as entertaining as ever, playing a lot of their own highly melodic songs, which weave folk, Americana, and pop into their own irresistable sound. Cracking songs with great lyrics and guitar playing are very much the order of the day, with banter flying between the two of them throughout. A complete contrast to the previous night's entertainment, but great for a Sunday teatime. And what's more, they are two thoroughly nice people as well.

Earlier on the Saturday, I had gone to Sowerby Bridge with some friends for a tour around some of the pubs there. Our visit coincided with the annual Rushbearing Festival, although we didn't see any sign of it. First stop was the Jubilee Refreshment Rooms beside the station, where around 20 of us piled in and kept owner Andrew Wright busy for several minutes as we all ordered our drinks. I love the Jubilee, it is a friendly place with decent beer, nice people, and an oasis of timeless calm irrespective of what is going on in the outside world. Next stop was the Loose Goose, a good old-fashioned local's pub with a lively but friendly atmosphere where we were able to watch the football results coming in, and for the Shaymen and Terriers fans amongst the group there was joy and relief as both teams ended up with a valuable away point.

We headed across the river to the Firehouse, where a few of us indulged in pizza to accompany our pints.This stylish bar, which is owned by the same people as The Old Gate in Hebden Bridge, is always worth a visit, with a good selection of both hand pulled and craft beer. Just along the road is the Hollins Mill - formerly the Works - which has a great selection of beers and highly-rated food. Set in a spectacular old workshop, the service here is friendly, quick, and efficient, and my pint of Moorhouses Blond Witch was the best I had all day. We stood outside and enjoyed our drinks in the pleasant sunshine, before moving on to a pub I had not visited in well over 40 years.

This was the Bull on The Bridge, formerly the Bulls Head, a large, important looking building in an imposing position on the main road. For years, the pub was a beer desert and a place to avoid, before being shut and boarded up for many years. It was renovated, and re-opened a few years ago, and seemed to be quite popular. The beer was OK, just about, I had half of something unremarkable. Further along Wharf Street, the former Engineers pub has just re-opened after many years of being being closed, and whist I am led to believe this is more of a food-led operation, it is good to see a pub re-opening and bucking the trend. Our final pub of the visit was the Turks Head, a small pub beside the river just off the main road. We grabbed our beers and headed outside to the attractive terraced beer garden to enjoy the evening sunshine.

I had to go not too long afterwards as it was getting closer to my gig at The Lantern, but it had been a most enjoyable afternoon with friends in one of West Yorkshire's best drinking towns....

My thoughts on 'Youth Detention' by Lee Bains lll and The Glory Fires here. 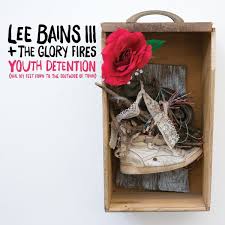 And here is the band, playing 'Nail My Feet to the Southside of Town'....