These words from The Smiths' grim song about the Moors Murderers often ring around my head, but often in a completely different and more positive scenario. For me, Manchester, the city, its culture, and its people have had a profound influence on my life, as I wrote here in my reaction to last year's bomb attack. The Smiths may be my favourite band from Manchester, but not far behind them are The Fall, whose charismatic and autocratic frontman, another Smith, Mark E. sadly passed away this week.

The Fall. Nobody was like them. A distinctive sound which nonetheless has had a massive impact on so many indie bands over the years. A band whose members were frequently sacked by their leader, to such an extent that in their 40 or so year existence they could make up 6 football teams. A band cast in the style of their acerbic, awkward, and confrontational leader. They played in a kind of warped Rockabilly style, with Smith singing, ranting, or drawling in his Salfordian accent over the music like some kind of demented preacher. The late John Peel loved them and championed them for years, and they just carried on in their own distinctive style. They had the odd hit, with covers of R Dean Taylor's 'There's a Ghost in my House', and The Kinks' 'Victoria', but this wasn't really what The Fall were about. They released countless albums and singles, and whilst they dabbled with the charts from time to time, they were always too left field for widespread success.

To me, The Fall were - like ex-radio presenter James Stannage, who I regularly see in the Stalybridge Buffet Bar - a link back to my student days in Manchester. Other local bands like The Buzzcocks from that time may have disappeared, but The Fall just carried on, dragged along by Smith's cussed determination. To me, they have been a major part of the sound of Manchester, a constant back beat for the last four decades. A sound that will sadly beat no more. Mark Smith once said that it would still be The Fall if it was "just me and your Granny on bongos". Sadly now, though, your Granny is on her own, bongos or not.

*************
Mark E. Smith loved pubs and loved a drink, I read once that his favourite pub was the Crown and Kettle at the end of Oldham Road. He could apparently be charming company despite his reputation, and any visiting journalists who had come to interview him would tend to be taken on a crawl of some of the city's traditional pubs. Whilst I suspect he may not have been a fan of craft beer, I am sure there would have been plenty more of the beers on offer that he would have enjoyed at the Manchester Beer and Cider Festival which has been taking place at Manchester Central this week.

It was a couple of years since I had been to the Festival. I had gone on the Saturday with some friends from the Buffet Bar, and whilst we had had some great beers, it was very busy and uncomfortable at times. This year, I took the Friday off work, and whilst it was busy, it was a lot more bearable. I met my friends Rob and Jay at Brighouse station, and an hour or so later we were alighting at Victoria. A quick loosener and toilet break at Corbieres, and then we made our way to the Festival.

Getting in was quick and straightforward, and we made our way to the Brewsmith bar for a quick half, Nelson Sauvin being my choice. A good start. There seemed to be more of the hall being used this time, which was just as well, as there were hundreds of beers and ciders on offer. Because of that I decided to limit myself to breweries I had not tried, or, as was the case with Brewsmith, beers I had not tried before, although there were a couple of exceptions later. The next beer I tried was from a brewery I hadn't come across before, Cascade IPA from the Knockout Brewery in Belfast, unfined and pleasant.

One brewery whose beers I wanted to try was Pomona Island, a new entrant to the local scene, all the way from Salford. I tried both of their beers, a delicious third of their Porter, and then a half of their delicious, and deceptive 5.3% NZ Pale, made with Motueka, Rakau, and Waimea hops. On this showing, a new star is born. My friend Kirsten walked by, stopping for a quick chat and to recommend Twelve Apostles from the Bristol Beer Factory. I tried a half later, and it was one of the stand out beers of the day, full of fruity Australian hoppiness.

There were a number of brewery-run bars in the centre of the hall. One of them was Thirst Class, from Stockport, and despite them being around for 4 years or so, I can't recall ever having had any of their beers. I put that right with a half of their New Zealand Pale, light and hoppy and weighing in at 4.4%, and had a good chat with the guy on the bar. Next door were Blackjack, and it gave me the opportunity to have a natter with brewer Rob Hamilton, who I used to see regularly when he worked at the Marble Arch several years ago. Blackjack have been going for 5 years now and seem to be going from strength to strength. On Rob's recommendation I tried a half of the Manchester Brown, a collaboration with Reasons To Be Cheerful, a traditional brown ale with added hazelnuts, which made for very pleasant drinking. I said I would try to get over later in the year for one of their brewery open days. Something to look forward to!

I caught up again with my friends Rob and Jay, and after a half of Cumbrian 5 Hop - breaking my self-imposed rules - at the Hawkshead bar, we wandered over to see what was on tap. It was mainly thirds from here on in, and amongst the delights on here, I particularly enjoyed Peaches and Beaches, a fruited sour IPA from Marble, Vic Secret Mosaic from Cloudwater, and Torrside's delightfully-named I'm So Bored With the USA, an ultra-hopped 7.4% IPA made with European hops. Jay was particularly taken with the Orange and Basil from Mad Hatter.

I had a final half of Mallinsons, where Tara and Elaine were both busily serving on the bar, and then it was time to leave. It had been a great afternoon, there was a fantastic, friendly atmosphere, lots of familiar faces, and some excellent beer. And it was a great showcase for the skills of so many of our brewers, both local and national. I am already looking forward to next year.... 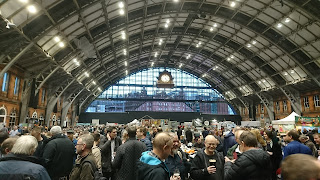