All Written Down in Numbers....

January 20, 2018
Despite the weather's best attempts to interrupt the proceedings, I managed to pack a lot into a busy week....

1. The Best of Bingley
I caught the train up the Aire Valley from Bradford to Bingley last Saturday to check out a new-to-me micro pub which made it into the 2018 Good Beer Guide. This is Chip N Ern, situated a few minutes walk from the railway station on Main Street. And very nice it is too. It looks like it was originally a shop, and features a comfortable wood-panelled downstairs room with a bar in the far corner as you go in. Upstairs there is another attractive room with additional seating. The beer choice, featuring local breweries Bridgehouse, Baildon, and Bingley, was a tad disappointing, though to be fair, the pint of Wits End from Baildon Brewery that I had was perfectly acceptable. Chip N Ern has the feel of somewhere well-established, and I suppose as it opened in 2015, it is something of a veteran in micro pub terms. It was filling up nicely by the time I left, and re-traced my steps back towards the railway station. More or less opposite the entrance is Foundry Hill, which is a modern cellar bar with 4 beers on hand pump. Resisting the temptation of Mr Grundy's Big Willie, I opted instead for a pint of Cross Bay Sunset, which was very nice. The Foundry is a pleasant place with a friendly atmosphere, although I found the image of a flickering fire on the TV screen a bit irritating, which I am sure is not the intended reaction!

A few minutes walk away is Platform 1 3/4, situated in a small parade of shops in the bar formerly known as Off the Tap. It is now run by Sean Garvey, who also has the New Inn at Denholme and used to have Dirty Dicks in Halifax. It has been re-furbished and now features lots of comfortable seating, a complete contrast to the rather spartan interior in its previous guise. Sadly, Sean wasn't around when I called, but I am happy to report that the Saltaire Pacifica I had was in fine form.

It was still only a few minutes walk back to the station to get the train back to Bradford. It was my first visit for a few years to Bingley, and the three pubs I visited provided a most enjoyable mini-crawl. Back in Bradford, I visited those two stalwarts of the burgeoning scene on North Parade, the Sparrow and Record Cafe. Both were very busy, plenty of Bradford City fans in evidence in both, drowning their sorrows after suffering a home defeat. Both bars had good beers on, and I enjoyed a pleasant hour or so before catching the train back to Halifax.

2. Entertainment in Halifax
The following afternoon, I headed over to the Grayston Unity. Sundays here are relaxed, they usually play an album of the week, and more often than not, despite its small size, there is live music on offer. Now in summer, it tends to be in the yard out back, but at this time of year it happens in the sitting room. I had come to see Ivan Campo, who I'd first heard a month or two back when they did a session for Marc Riley's evening show on Radio 6 Music. They take their name from the Spanish footballer who became something of a folk hero when he played for Bolton Wanderers. This connection even led to the band being invited to appear and perform on a TV station in Madrid last year! With their equipment taking up a good third of the room, there wasn't much room for an audience, but I did manage to get a lean against the wall and see most of the performance. They treated us to some pleasant, wistful indie-rock, packed with some great melodies. It was a most enjoyable way to pass a Sunday afternoon. I bought a copy of their latest album, 'Season of the King', and had a good natter after the gig with Adam and Ben from the band, both top lads. A few friends, Trish and Pete, and Chris and Anna-Marie, had come over from Brighouse, and I rounded off my time at the Grayston playing Cards Against Humanity with them, a good, if cringe-inducing, laugh!

I made my way over to The Lantern, where there was a tribute evening being held in honour of local writer and blogger Sean Liquorish, who sadly died 12 months ago, where I met our Tom and Annie. I had missed Better then Six, but the guy on stage when I got there was pretty good. There were plenty of people there, and I am sure that Sean would have been honoured that so many turned up the event. A fitting tribute to a top guy....

3. A Midweek Pint at The Market Tavern
We had plenty of snow, wind, and all sorts of nasty weather this week. I battled over the Pennines several times to and from work, fortunately without too much disruption and delay. One day which didn't actually turn out as bad was Wednesday, and that evening I decided to call in for a pint at the Market Tavern in Brighouse. Here I enjoyed a pleasant pint of Abbeydale Space Hopper. I was joined for a beer by Roger Davies, who many of you will know as a fine singer and songwriter, but what you may not know is that he is also an excellent artist. A former art student, Roger was telling me he is working hard painting away for an exhibition of his work to be held in March at Harrison Lord in Brighouse, and based on the reaction to his pictures so far, it should prove very popular. I will let you know the dates when I have them, and as a taster, here's one of his paintings.... 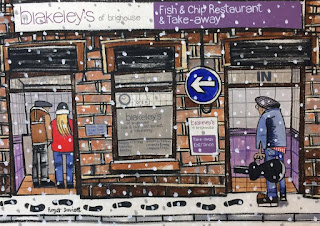 4. This Is The Kit at the Brudenell, Leeds
Because of the weather, I had been worried that I might not be able to get over to Leeds to see This Is The Kit on Thursday evening. Fortunately, it relented, and I got there and got parked up in plenty of time. I checked in and got my hand stamped, and went for a pint in the lounge bar. I opted for a pint of Ignore the Ignorant from Kirkstall Brewery, and named after The Cribs' classic 2009 album of the same name. The beer, of which some of the proceeds are in aid of Cystic Fibrosis, was a most enjoyable light and hoppy session ale, and as I have written previously, the Brudenell deserves credit for its beer as well as its music.The gig was sold out, which reflects the fact that This Is The Kit seem to appeal to a wide mix of music fans and age groups. Frequently played on Radio 6 these days, their spacey alt-folk seems to have struck a chord with so many. I managed to worm my way through to the front, where the band were tuning up and plugging in, and shortly afterwards they began. The band is the vehicle of Kate Stables, the only permanent member, who was born in Bristol but is now based in Paris. And whilst it is Kate who leads, the rest of the band all contribute to their mesmerising sound. Guitarist Neil Smith is an excellent exponent of the 'less is more' style, a sympathetic lick here, a complementary flourish there, but can thrash his guitar with the best when the song demands it. With the added depth offered by saxophone and trumpet on a number of tracks, this is captivating stuff. Their latest album 'Moonshine Freeze' is excellent, and was naturally heavily featured on the night, although they also played a number of tracks from their earlier releases. They came over as a decent set of guys, and Kate seemed genuinely touched by the level of support from the crowd. A wonderful evening from a set of excellent musicians....
And here is 'Moonshine Freeze'....

'Moonshine Freeze' by This Is The Kit' is out now on Rough Trade Records.
'Season of the King' by Ivan Campo is out now on Debt Records.

The title of this blog is taken from one of the tracks on 'Moonshine Freeze'.