Back On The Bradford Parade....

It's a place that often gets overlooked by visitors these days, with to-let signs and empty shop fronts a-plenty dominating parts of the city centre. But until recently it had been well before the pandemic since I had paid the city a visit. Here's what I found.... 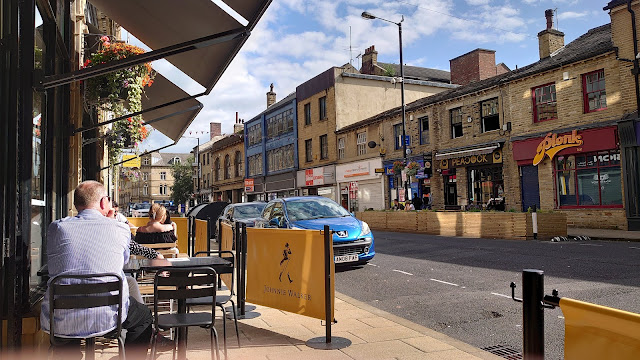 It was a hot day as I queued to buy a ticket at Halifax railway station. The lady with the dog in front of me was wanting to get to Blackburn but had numerous questions for the guy behind the screen, so by the time I'd got my ticket and headed down the stairs to the platform, my train had just departed, the next one going to Bradford was 30 minutes later. Slightly frustrated at this unscheduled delay, I took what seemed to be the best course of action and went to the Ring O' Bells, the nearest pub to Halifax station, which is situated just over 5 minutes walk away. Set beside the town's Minster, the pub is not one that generally features in the usual pub circuits, has hardly if ever featured in the Good Beer Guide, but it attracts a loyal band of regulars, always provides a warm welcome, and with several hand pumps - one always featuring Acorn Barnsley Bitter - and good value meals served at lunchtimes, it is well worth a visit. I ordered a pint of Rudgate Viking, which was just what was required as I sat outside in the sunshine as the time of the next train approached.
I duly arrived in Bradford, and made my way to the Exchange Craft Beer House on Market Street. This cellar bar is located in the Grade 1-listed former Wool Exchange which is one of many impressive buildings within the city centre. Dating from the 1860's this was where deals would be struck to buy and sell wool. These days, the wool and the merchants have long gone, but their descendants are able to enjoy a range of cask and keg beers at the Exchange, with 4 or 5 options of both. Cask always includes one from Mytholmroyd brewers Nightjar, presumably because both bar and brewery share the same owner. This was my third visit in recent times, and on this occasion I had a pint of the 3.9% Volk from Wishbone from Keighley. I will also be forever grateful to the guys at the Exchange as they looked after a copy of Iggy Pop's Lust for Life which I left behind in the bar when I called in after a recent visit to Skipton, prompting a return a few days later. 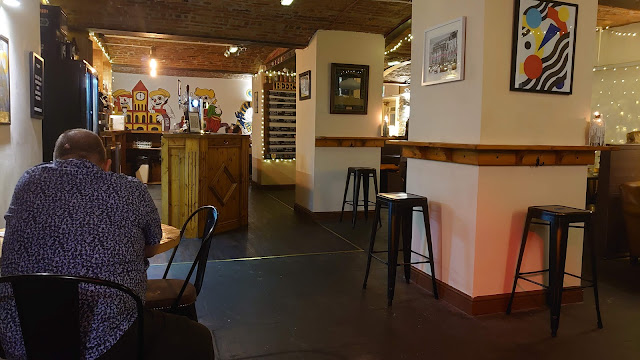 From there I headed up the hill to North Parade, the area with the biggest concentration of places for a drink. It is a sobering walk, the Arndale Centre looks forlorn and Darley Street has hordes of To Let and For Sale signs. People were scuttling through as if they didn't want to be drawn in to the air of despair that seems to shroud this part of the city.
I emerged in to sunshine and on to North Parade. Places like Rumshackalack and the Peacock Bar were still open, Al's Dime Bar has now relocated to Darley Street, and renamed as Al's Juke Bar, but I decided to visit Crafted (opening picture), the latest iteration of a bar once called the Beer House that has had many guises over the years but never quite been able to become established. And whilst it was lovely to sit outside in the sunshine, the beer list was uninspiring and I settled on a half of Camden Pale, which was at least cold and wet, but flavour was sadly lacking.
I moved on a few doors to Boar & Fable, which I had called in on my last visit to the city. It sells a small range of cask and craft ales, which today featured beers from Wishbone and Beartown on cask and Mobberley Brewhouse and Thornbridge on keg. I went for a collaboration on keg from Turning Point and Almasty called Unnatural Selection. This was, not unexpectedly given the collaborators' own beers, a hazy pale clocking in at 6% ABV. I enjoyed my half as I sat in the sun and watched the world go by.
Literally next door is the Sparrow Bier Cafe, now run by Kirkstall Brewery, so as you would expect there were several beers on from them. I took my seat at a table only feet from where I had been sat at Boar & Fable, and ordered a half of Five Points Jupa, which is a beer I have always enjoyed. A 5.5% juicy pale ale, made with Simcoe, Mosaic, and Citra hops, it bursts with tropical flavours, and with its slight spritz it really hit the spot. Two guys were sat at a nearby table loudly conducting business on the phone as they enjoyed a beer or two. A large white BMW convertible drove along North Parade accompanied by the thud of bass-heavy rap and parked across the road. A huge guy built like Mr T, emerged, and started to head towards the bar. He looked like he meant business, stopped when he saw me, and much to my relief, politely asked that if you sat at a table would somebody come to take your order? This I confirmed, and reassured, he sat at the next table to the business guys, and ordered a glass of something cold. The sun was just moving behind the buildings across the road, so I decided to finish my beer, leave the entertainment behind, and move on.
My next stop was a relative odyssey after the close proximity of the last few bars. It was though less than a minute's walk away across the road to the Record Cafe. The bar opened several years ago offering a good range of cask and craft beers, charcuterie and cheeses, together with an upstairs vinyl store. It had still been closed when I had last been in Bradford, but today it was clearly open, with several customers sat at tables on the pavement outside. I decided to go and sit in, and I was soon drinking a pint of Horsforth Pale and enjoying the atmosphere of what has always been a top-notch bar. I felt chilled, it was great to be back, and the beer, which was on cask was excellent (if I'd been scoring it would have been a NBSS 3.5 at least, nudging a 4), and it struck me that I couldn't ever remember having their beers before, a surprise considering they have been brewing since 2017 and are relatively local. It was approaching time to head off to catch my train, but I just had a time for a quick half, opting for a half of Faith on keg from Northern Monk. 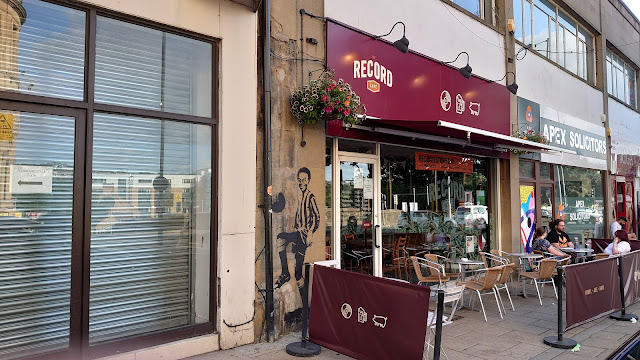 I had enjoyed my visit, and if I'd had more time I would have also visited Jacobs Well and the Corn Dolly, the latter of which, along with the Fighting Cock a mile or two away, has enjoyed 25 years in the Good Beer Guide. But it just means I will have to schedule another visit at some point. If you haven't thought of going to Bradford recently don't be put off by the For Sale signs and empty shop fronts. You will find a welcoming city with some great pubs and bars with plenty of good beer....
Follow me on twitter: @realalemusic